as far as i know, just before the midnight the army showed up on a few bridges, took the tv station, shot the parliament with some tanks, some police buildings with a helicopter as well as bombed the place Erdogan was staying after he left it. Immediately after the coup members made their announcement, all of the political parties, all of the army high command and so on denied any involvement and said that the democratically elected goverment should be supported here, so it seems they had very little support anywhere to begin with.

In the 5-6 hours after that, the police started arresting some of the soldiers, the civilians mobbed the rest.The labour minister, his 2 bodyguards and a angry mob took the TV station (which in it self says quite a lot), the coup soldiers apparently captured a second one but got arrested shortly afterwards. Most of the major news sites (SVT, CNN, BBC, Finnish ones) are also saying that the turkish jets shot down one of the helicopters used by the coup, as well as possibly attacked the tanks shooting at the parliament building. The part about the jets can be taken with a grain of salt, but considering there's no more shooting going on and there's a bunch of goverment officials in front of the news crews, it seems pretty much over.

Yeah, this looks quite over for all practical purposes, I can't see any way for coupers to win at this point.
Top

Reuters report that an anti-government group has taken over a frigate at golcuk and have taken high ranking hostages.

Well, it is all over now. Apparently 2745 judges were laid off... wow, I wonder what percentage of juridical staff is it.

To me start to look more like false flag operation to justify more power for Erdogan.

orcbuster wrote:Reuters report that an anti-government group has taken over a frigate at golcuk and have taken high ranking hostages.

As well as bases all over Turkey are revolting against Erdogan. Incirlik is without power.

There were soldiers last night who seemed to fight on and not surrender. Now it's becoming a split in the country given that justices from the supreme court are being purged. 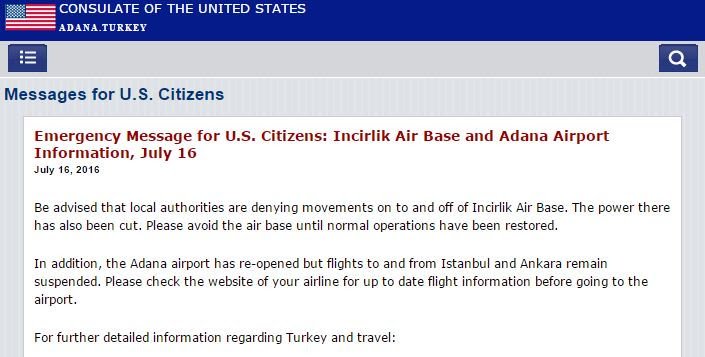 delfo wrote:
As well as bases all over Turkey are revolting against Erdogan.

Do you have any sources you could link for that?

Looking at the soldiers from last night, they were not properly equipped, they had just the gun and nothing else like food rations, grenades, ammunition, water, bayonets...than tanks when the APCs would have been more appropriate for such actions. They surrendered quickly...

I don't really have any hope that Turkish army is still fighting for power, to me it looks like a negotiation for their lives, nothing else.
Last edited by steppewolf on Sat 16 Jul 2016 17:03, edited 1 time in total.
Jassy-Khisinev offensive and Romania in SD2 thread