Akkku wrote:Every source i can find tells me that both tanks use the ISFCS-212 FCS, but suddenly we are not talking about the FCS anymore, but the "FCS suite".
What is that supposed to mean? I know that the Type 99 has a stabilized thermal sight and an IR target tracker, but i was talking explicitly about "internal electronics".
What is different about the "FCS suite" and how does it affect hitting a target "while being stationary" at day?

The target was stationary and there was no wind. 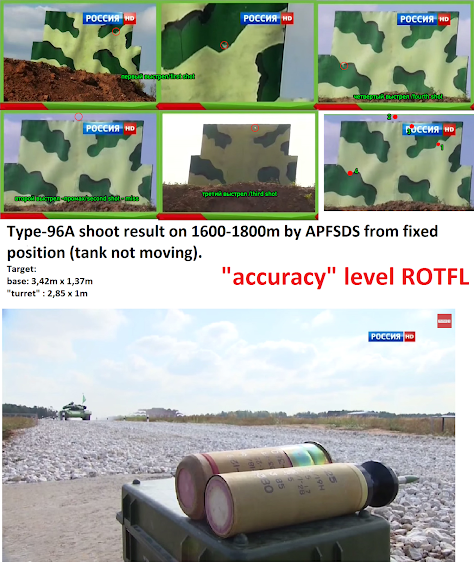 China's economic growth didn't start in the 90s: thanks to areas with lower taxes on the coasts, China became pretty attractive for foreign investors and entreprises back in the 80s, with 10% of growth a year.

Besides, regular relationship with the western world was brought back as early as 1978.

On the military topic, China was already receiving western stuff (like Marconi equipment for planes and tanks). The ISFCS-212 for example is the Centaur FCS used in Vickers MBT Mk.4 and up and was put on a chinese tank as far back as 1986 (Type 79).

So the fight between communism and capitalism pretty much made no sense at that time since China was already progressivement introducing capitalism. The western industry was already being outsourced.


TL DR: we are not in the Mao era and China isn't a regular communist state and especially not a straight ennemy of the western world. Should I talk about Nixon's travel in China in 1972?

The Deng Xiaoping Era would have been followed by a lot of troubles after the Tiananmen massacre that basically put a halt on any western technology export for military stuff in 1989. The soviets would not have provided help either.
Top

Oktoberfest wrote:The Deng Xiaoping Era would have been followed by a lot of troubles after the Tiananmen massacre that basically put a halt on any western technology export for military stuff in 1989. The soviets would not have provided help either.

Guess what, majority of the western companies crawled back into China after 1989, and that is in our timeline.

Soviet relationship is already thawing in 1988, campaign established the realignment of USSR to Asian allies too. So i don't see a problem in the narrative.

Hello everyone, and welcome to the development diary for Scandinavia. Like with Red Dragons, we'll list out our reasoning as to why the coalition is considered weak, outline justifications for some of the more significant changes and explain how we think they should work thematically.

Scandinavia exists as a coalition that is teetering on the edge of power, not necessarily weak but just completely incapable of plugging some gaps which drag them down to the point of unviability. Scandinavia, like Red Dragons lack much flavor beyond having extremely powerful infantry. It can often be frustrating to play Scandinavia, as while they have some very fun units (FSK, Otomatic, Nasams). they can be awkward to use and the supporting army is not up to par.

It is completely incapable of dealing with Superheavies reliably, as it lacks a decent ATGM plane or any strong vehicle-based anti tank options. The recon tab, while adequate, is also lacking in any high end options and seems to be forced to get by on very cheap "acceptable" units. In summary, Scandinavia seems a bit too focused on infantry and lacks in other areas.

In our mod, we are sticking to the general theme they have in vanilla but are giving them some more well rounded options without losing their focus.

The most notable changes are the rerole of the STRV 121 into the STRV 122, giving Scandinavia a true superheavy, and the ability of the RBS 70 MK.2 to fire at ground targets.

Scandinavia now should have a slightly stronger AA and Recon Tab, along with the capacity to deal with superheavies. Keep an eye out for the next Developer Diary, which will be a two parter - Eastern Block and Commonwealth
Last edited by Coal143 on Thu 2 Feb 2017 19:45, edited 1 time in total.

The roadwheeles on tracks or what are you speaking of??

Even my Bike here has tracks dude. You have no idea what you talking 'bout.


As for general changes, 0,2 sec aim time for all RAD SPAAGs?

The Fox APC ofc, how else would I move my Infantry? Hueys?

Edit: I will shove a Milan up the butt of your silly M1A2 if you say we don't have wheels, we SOLD you some Foxes lol.
Top

Nice. I always wanted the Strv122 for scandi. <3
Btw the Strv122 has a little more armour than a Leo2A5.
President of Eugen
Top

Akkku wrote:Nice. I always wanted the Strv122 for scandi. <3
Btw the Strv122 has a little more armour than a Leo2A5.

We couldn't find much in the way of sources, so we added a point of side armor I believe. More front armor would make the tank too good, anyway

Akkku wrote:Nice. I always wanted the Strv122 for scandi. <3
Btw the Strv122 has a little more armour than a Leo2A5.

Which is the reason for 10SAV.
We did not want to go for 23FAV since we are already giving Scandi 2 cards.
Also afaik, it is not public where exactly armour got increased?

What was the penetration of this missile? 16AP seems à bit high compared to the Starstreak, IMO if it had lower price, AP and range it would be better.
Besides, I'm not sure that this capability was massively used.

Good change, this should prevent it from wasting ammo.

Great change, killing two birds with one stone by replacing an unhistorical unit and replacing it with an interesting historical one.

Not sure that better armor is justified tbh, it remains a base M113.