FrangibleCover wrote:Excellent. Will this replace the CG Fist team do you think? Remember that the US gets it's Cat-C ATGM team from Light Riflemen so I think you'd get away with replacing your Cat-C ATGM replacement team with light infantry.

Currently I've just added it as a bit of a note at the bottom of the spreadsheet. The Norrlandsjägere is in a bit of an awkward spot with its overly heavy recoilless rifle. (Really I'm just waiting for Steel Divisions: Fulda '89 so I can update all my spreadsheets with a fourth weapon slot, towed weapons, and dedicated machine gun squads.

FrangibleCover wrote:How sure are you about that 1400m figure, by the way? I was finding 2km range numbers for RAT-700 and that's certainly not what I'd think of as the traditional remit of recoilless rifles.

I just picked the longest range I could remember for an infantry recoilless rifle. Though the Norrlandsjägere has 1575 m, so 1575 m sounds good!

Eukie wrote:I originally rejected the M40 for being unwieldy and too heavy for infantry. This has a total weight of not much more than the Pvpj 1110 and is wheeled, just like the Pvpj 1110.

It's shoulder fired in game.

The M40 is lighter than the Pvpj 1110 when you don't consider the mount.

I'm having a hard time finding just the barrel weight actually. I keep getting 209.5 kg which I assume is the weight of the carriage and all.

Mike wrote:I'm having a hard time finding just the barrel weight actually. I keep getting 209.5 kg which I assume is the weight of the carriage and all.

Mike wrote:I'm having a hard time finding just the barrel weight actually. I keep getting 209.5 kg which I assume is the weight of the carriage and all.

It's still funny that it's in game when TOW teams and HJ-8 teams were denied because of weight. 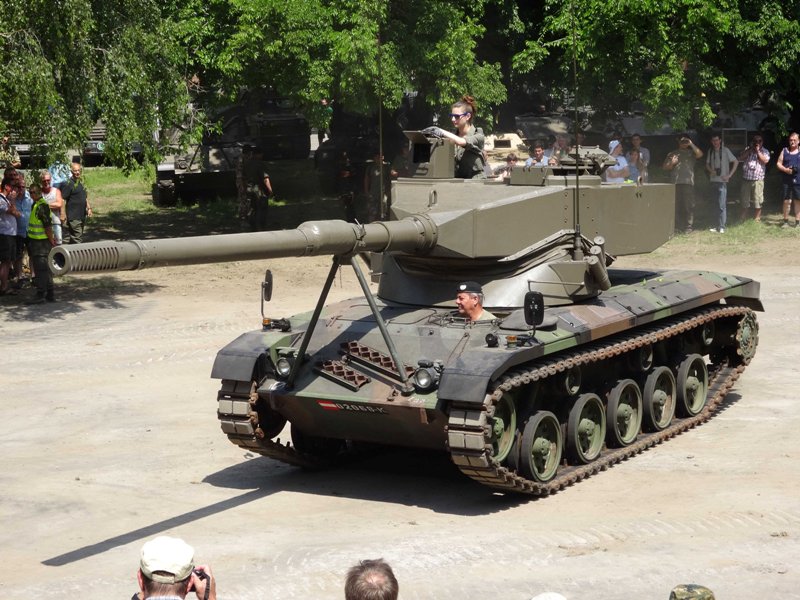 I also found a note on the always trustworthy GlobalSecurity.com[/s] that the SK105A2 was upgraded to use a french 105 mm smoothbore gun in 1985, for firing APFSDS rounds.

Basically, the Swiss had giant sod-off jammers that they acquired in 1993. They were fitted to Hunters, Tigers and Pilatus PC-9s. The photo I've attached shows an F-5F with one of these jammers and a pair of Sidewinders, the Hunters may also have had a load like that and they're a model we already have. Therefore, how about giving the Swiss a cheap aircraft with a pair of missiles and very high ECM to make up for not having SEAD? Alternatively, make it like the Electric Voodoo and the Raven and give it imaginary SEAD missiles but I'm much less fond of that solution. The pod alone could be argued to grant roughly 40% ECM on the basis that it's an RWR (10%), a late model Western jammer (20%) and implies that the aircraft is a dedicated EW platform (10%).

Edit: Also that SK-105A3 is going to be disgustingly good for a recon tank. No objections, like, but I think that's what Austria is going to be known for.
What if Wargame stuck to timeframe?

FrangibleCover wrote:Stupid unit idea time: Hunter T.74 EW [...] The pod alone could be argued to grant roughly 40% ECM on the basis that it's an RWR (10%), a late model Western jammer (20%) and implies that the aircraft is a dedicated EW platform (10%).

"Technically, dropping a bunch of napalm on the enemy air defences is suppressing them..."

FrangibleCover wrote:Edit: Also that SK-105A3 is going to be disgustingly good for a recon tank. No objections, like, but I think that's what Austria is going to be known for.

Well, it's nice they can be known for something, at least?

Munitions for the Swiss Blindicides
I came across some info about Raketenrohr 58 and 58/80 almost by complete accident, in this budget and Zur Kriegstauglichkeit des Raketenrohrs der Schweizer Armee in Gegenwart und Zukunft (Flückiger, Lorenz, 1984) which gave me the following penetration figures for their ammunition:

In the topic I posted on this forum I've been informed that it as actually already been done before, which is pretty cool.

While looking through your document though I noticed the lack of some units for Switzerland though:
Most notably the Panzergrenadiere and the Sicherungstrupp/Gruppe for the different specialization types (Could be just done as one Inf tbh) as well as the Dragonier? (not 100% sure about the name) Trupp which was a five man team sporting a "mobile" M2 Browning.

Furthermore regarding the use of flame throwers, the flame thrower was in use with the Grenadiers until some time in the 70s/80s where they stopped using it after an accident at a public display.

Ah yes, have you considered Inf Mortar teams (both 81mm and 120mm were used extensively in the Swiss Infantry). They could have a very low speed to show that they are carrying equipment and would therefore need to be transported in vehicles to move at reasonable speeds.

I suppose the Swiss Bloodhound missile wasn't included because it is stationary? It was still in use until 1999s.
I suppose this is the same reason why the stationary Oerlikon 35-mm Twin AA Gun isn't included

As for your question if Switzerland operated TOW on anything else than the 6x6 Piranhas, afaik they didn't.

As for the helicopters, the Super Puma didn't have any MG mounted to it if I recall correctly.
Furthermore for the planes, the Swiss F/A-18s sadly didn't come with ground combat capabilities (they literally didn't have that installed until recently), so sadly the only thing the can use for ground attacks is the Vulcan

Also: You forgot the Swiss Navy with its dozen river/lack patrol boats XD

There was a short Stgw 57 Kommando version. I'm not sure by what units it might have been used though.

Users browsing this forum: No registered users and 46 guests