Good news is that they are trying to do both to please both crowds.

I like the ability to rewind, it just needs to be better polished

Does not affiliate with members who post in #MakeAmericaGreatAgain

When will we be getting LAV and Phrog for Marines?(And don't try that argument, there is already plenty of evidence against it)
Top

The people of Czechoslovavikstan thank you for making the mighty STROP 2 even mightier.

Excroat3 wrote:Sometimes I hate this community. We call for something to be changed, it gets changed, and we immediately want it switched back to the old version.

Xeno426 wrote:Why are you comparing a recon helicopter to a combat helicopter?

I was comparing AA capabilities at the same price. Besides, the PAH-2 Tiger is a recon helicopter and gets 4 HOT 2s, rockets and 4 Stingers for 120 points vs the Mi-24Ks 110. If the Mi-24K could get 4 Iglas it would help mitigate the USSR's air assault weakness, but a cheaper AA Hind would be preferable. Something like the Hind P, except with Iglas instead of Kokons. I'll reiterate that the Hind V needs its rocket accuracy back; why they were given such terrible accuracy and a boosted ROF in the first place? Why aren't VDV available in Hinds, btw? And where is the Mi-17?

ChrisCullen Inc wrote:No they can't. Two Lynx 3s costs 220 points, which an Mi-24K does not.

I worded that poorly, I meant to highlight that they are the same price.

Graphic wrote:You know who can do them, and is almost guaranteed to come out on top? China/Red Dragons. USSR doesn't get to do everything.

Almost guaranteed? Have you played China/Red Dragons? On a good day, they're about equal to the Eurocorps in air assault, but this is beside the point. I've already argued that other coalitions don't have to rely on anyone, so why should the USSR be purposefully restricted in capabilities? And Eurocorps is not overrated, they're living up to the hype quite easily.

icehawk308 wrote:There are a few threads going around about this exact point, and not like soviets didnt mount AA missiles on non proto platforms 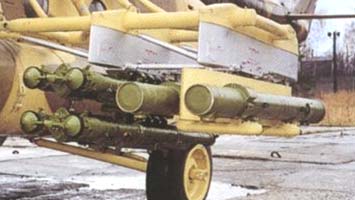 Carnage1138 wrote: We need a cheap anti-helo chopper for all those godawful air assault charges. Edit: thanks for bringing these up. You'd have to modify the R-60s range, of course, like you do with the AIM-9Ms on the Supercobra, but its feasible. Unfortunately they are also 3 HE and very inaccurate compared to the Igla, so they'd have to be mounted on a dedicated AA Hind, which is unlikely to happen, unless someone says otherwise. Fortunately, the R-73 could also be mounted on Hinds, so that could be an alternative to the R-60. What's Hudo-Ren? It may be Hukyo-Ren?
I think no need to change name. Kyodo-Tai is not bad.

It would be neither Hudo-Ren nor Hukyo-Ren since the HU syllable doesn't exist in Japanese. I like how the names were changed from plausible names to names that just can't actually happen with the Japanese alphabet. It is the same with the change to the regular infantries name, Syoujuu-Buntai. "SYO" is not a possible syllable in the Japanese alphabet.

Out of all the changes Eugene has made, this one honestly bothers me more than anything.
Last edited by Red_King on Thu 10 Apr 2014 12:12, edited 1 time in total.
Top

Maybe it's the Hadouken?
/troll

Excroat3 wrote:Sometimes I hate this community. We call for something to be changed, it gets changed, and we immediately want it switched back to the old version.