Thoughts on naval now that we can actually use it?

Full disclosure: This is 100% based on my only naval game, a long, drawn out game where the enemy massed smaller ships and their CIWS just took down every missile ever fired at them, regardless of it's quality or how many missiles there were.

Pure naval battles are hands down the worst thing I've ever tried that I can remember at the moment. It's possible it was a fluke game. It's possible that I've repressed memories of worse video game experiences. But I very much doubt that I'll seek the chance to disprove either of those in the near future.

Maybe combined battles will be better. But at the moment, I'm leaning towards never ever touching naval ever again. It seems to be every bit as bad as I feared it would be.

Having played both NAVAL-ONLY and Mixed Naval-Land a few times. My early impressions are that this game type isn't very good. The game just rewards blobbing, doesn't encourage recon, and allows smaller ships to just destroy every incoming missile regardless of situation. The game is still about who can spam the most CIWS early and then spam the most ASHM gunboats later. Worse is that planes are worthless, particularly in Destruction game modes as they are GUARANTEED to be shot down and nearly guaranteed to have all their missiles shot down in return.

I like the effort Eugen has put into this, but its still a bad experience.

EDIT: I forgot to mention my concerns about mixed maps. On mixed maps land combat is a complete sideshow. The game is entirely won or lost at sea and almost no one bothers to really fight it out on land. This will likely drive up the importance of marine decks (which is good) but ultimately it is hollow and unfulfilled. ships don't dominate the combat on land, but they don't need to since both sides pour their points, time, and attention into the naval battle rather than a balanced game.
Last edited by MajoorHokie on Thu 10 Apr 2014 19:56, edited 1 time in total.

Well I had two naval battles so far and it was quite OK.

Blobbing still seems to be the prefered tactic. Could you please introduce that nearby ships get damaged if a ship gets blown up? That shockwave you see on the water seems to be a good damage area.

Well, when it comes to the naval "gameplay", I don't suppose we can convince Eugene to remove it again, can we?

Seriously though. It's awful. I wasn't in the closed beta, so maybe this is better than what they had, but this is blob warfare of the worst kind.

I think their main problem is their over emphasis on CIWS. In reality, CIWS is not a ship's primary means of anti-missile defense. It's an absolute last line of defense when every other option (evasion, ECM, anti-missile missiles) have failed. However, right now it's basically a magical force field, especially when you have a few ships together.

Furthermore, the map is way to small to have any kind of meaningful naval maneuvers. Modern ships are rarely going to close into gun range with an enemy destroyer. The thought is, frankly, preposterous.

I'm not asking for them to turn this into Harpoon or "Command: Modern Air/Naval Operations", that's not feasible, I know, but this is neither realistic or fun, at least to me.
Top

But mixed maps is cool.
Top

....but still if someone is sinking all those points into naval.... they can't possibly be sinking it into other places.

As long as "I win the naval part = I win the whole map" isn't happening, then the change has been successful.

I'd give it a full week of testing (probably what 2 more patches before release) before even dreaming of rendering judgment.

Lol maybe they should have just teamed with the guys who made Naval War: Arctic Circle and added a whole seperate gamemode after all :L 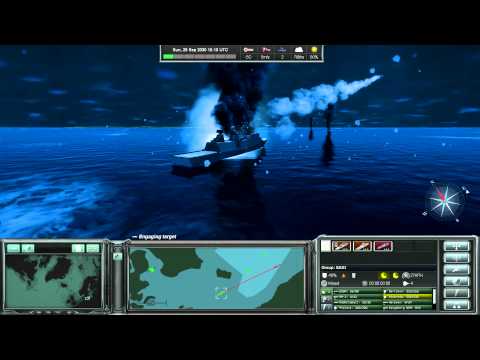 Nah hopefully naval will end up just fine.
It's pretty major so there are bound to be bumps at the beginning but imagine how good it will come to be once people get used to it and balancing becomes easier and less of a nebulous task.

FirmusPiett wrote:Nah hopefully naval will end up just fine.
It's pretty major so there are bound to be bumps at the beginning but imagine how good it will come to be once people get used to it and balancing becomes easier and less of a nebulous task.

Users browsing this forum: No registered users and 52 guests