Eukie wrote:However, with M48's being Portugal's most modern tank until their 1992 M60A3 TTS purchase, I imagine that in the hypothetical WWIIIs of Wargame, they might actually have been a prime customer.

Especially since people weren't offloading all their Leopard 2s and the like.

A prelude I should have mentioned earlier - I have found SIPRI to be not entirely reliable in our case, listing a few weapons systems we possess and missing others we don't. Not that it's without value, of course.

Given our colonial era shady deals, and some done after (the covert sale of Makila engines to South Africa for their Oryxes, for example), I can't help but wonder if SIPRI's inaccuracy is the product of deliberate misreporting on Portugal's behalf. Really curious.

And of course, a sincere thank you for your contributions.

Xeno426 wrote:Portugal never received the AIM-9B. The first Sidewinder they purchased was the AIM-9E in 1977 for their G.91/R3 aircraft, so I doubt their Sabers were ever modified to make use of the missile.

We did, and they indeed were. 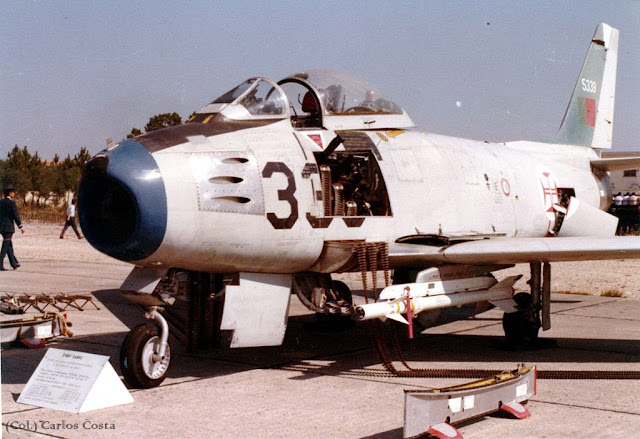 The first batch were all F-86F-35 NA, later upgraded to F-40s. According to the Portuguese Wikipedia, the AIM-9Bs were acquired in 1962, but I have no access to the source.

Xeno426 wrote:I would contend with the A-7P loadout, though. The aircraft was acquired in 1982, yet your loadout puts it way up to 1994. This leaves CatB with only G.91 and F-86Fs to drop ordinance, which is pretty limited. A better option would be to have multiple A-7P variants, representing different upgrades.

That was deliberate, to take advantage of its late life ECM improvements and advanced ammunition - not to mention the fact that until the F-16's arrival, they were stuck in an entirely unsuited role.

I do have another variant listed, the twin-seater TA-7P, listed at 1985 - although full disclosure, I picked that date because I could not find the service date for the BL755, as SIPRI (again) does not list it.

Xeno426 wrote:They would be equipped with the AIM-9P missile, as they never purchased the AIM-9L or AIM-9M.

AIM-9M were purchased from Germany OOTF, but Ls did arrive, from what I can find, with the F-16s, as the L and M are the only variants it ever used.

2003 was the service date for our first MLU.

Xeno426 wrote:You missed the F-84E and F-84G aircraft they got from the Netherlands and the USA.

I listed them as a footnote on the B-26's entry. Truth is they were absolutely run to the ground in Africa. With a crippling lack of spares and the harsh conditions taking its toll, the 125 F-84Gs were down to under 5 by the end of the war. It wouldn't be beyond me to list them - the ANZAC Phantom doesn't bother me much, for example - but it'd be redundant even if it was in.

With a model already in the game, however, and with Portugal actually being the last service user, I've no doubt it'd be a no brainer for Eugen.

The Helicanhão, with a side mounted MG 151. The single helo tab vehicle I listed, and another weakness in our roster. Attack helicopters were, and in fact are, a long delayed dream of the military chiefs, but it was just not to be.

Holy_crap wrote:Obviously Portugal's special forces would be Ronaldo '85, well within timeframe and all weapons in service by then.

I find the fact you know Ronaldo's birth year by heart is a bit off-putting..

Eukie wrote:Of note:
[list]
[*]The MILAN 2 was ordered in 1988 and arrived in the 1989-1990 period. Holy crap how did I miss that, I looked everywhere and it was right there in SIPRI. Thank you!
[*]Portugal received 28 YP-408's from the Netherlands in 1993. Only used by the Air Force, in particular the Polícia Aérea, the FAP's MP and ground defense force. They do have two special forces units, the Force Protection Unit and RESCOM, but their tasks - force protection and CSAR - respectively - are somewhat out of frame for Wargame.
[*]Portugal received 36 second-hand M163 VADS in 1987-1989 False information spread by SIPRI, Jane's, and every site that copied them. There are zero Portuguese sources to prove their existance.
[*]The V-700 was a variant of the Chaimite that carried SS-11 MCLOS ATGMs. Another case of false info, or at least misleading. Only the V-200 was ever adopted - the V-700 was a BRAVIA prototype with Swingfire or HOT twin launchers. The army DID modify some V-200s to carry SS-11s, but they retained their V-200 designation. Sadly, I couldn't find a picture of either, but I was going to list them in the VEH section - I just realized I didn't. I'll fix that right away.
[*]Portugal acquired the Condor APC in 1984 Also only used by the Air Force.
[*]Portugal operated the A-7E Corsair II from 1982 to 1984. These could be armed with Sidewinders and Mark 82's. We never operated the A-7E. I listed the single and twin seater A-7Ps. We also operated a single TA-7C on loan from the USN for initial pilot conversion - affectionately known as the Pomba Branca, or White Dove, for its stock USN color.

Eukie wrote:I don't think anyone really considered buying the Super M48. At the time the project was developed, as the article in the link notes, the Cold War had just ended and everyone were in the process of updating their 60's era tanks. Rich countries could buy Leopard 2A4's and Abrams to their heart's content, while less rich nations could buy the M60's, Leopard 1's, AMX-30's, T-72's, etc. that were flooding onto the markets because other countries were upgrading and/or downsizing.

However, with M48's being Portugal's most modern tank until their 1992 M60A3 TTS purchase, I imagine that in the hypothetical WWIIIs of Wargame, they might actually have been a prime customer.

I would agree if the tank we acquired was any other than the M60A3. With the M60 being an iterative evolution of the M48, I believe a Super M48 would be very, very similar in performance to an M60A3. It just makes little sense to me we'd purchase such an upgrade pack when we're purchasing the iterative evolution of that very tank, specially as the Super M48 became available in the 90's, right as we were buying M60A3s. If we were in dire need, we would probably have pushed the purchase earlier.

I doubt AIM-9M were purchased from Germany as they never operated the AIM-9M IIRC.

Lord Helmchen wrote:I doubt AIM-9M were purchased from Germany as they never operated the AIM-9M IIRC.

Well, then this is just plain wrong. Not that I bothered vetting OOTF stuff either...

Lord Helmchen wrote:I doubt AIM-9M were purchased from Germany as they never operated the AIM-9M IIRC.

Well, then this is just plain wrong. Not that I bothered vetting OOTF stuff either...

Probably. Maybe it's AIM-9L as IRIS-T is in service since 2005 and Germany wanted to get rid of its cold war AIM-9 stocks. Or they've been upgraded. Still wouldn't be ITF as the only reason for the sales really happening would be the end of the cold war.

Wouldn't be surprised. It's impossible to tell an AIM-9L from an AIM-9M externally.

Holy necro, but I just found something highly interesting.

Here seen on the Armada 90, but in widespread use in all Chaimites. See that five-pointed device? That is actually a BRAVIA-designed "anti-ambush device", which in use would mount 5 60mm grenades and fired by a dedicated console. I cannot find information with its actual use, but it's a fair assumption it would cause an instant HE barrage in the turret's frontal perimeter. It'd be a very interesting mechanism to integrate in Wargame.

And please don't bury this in off-topic Orc, this effort has no meaning or place outside the context of Wargame

That would be a bit too strong I think, but Italy/Spain-Portugal would be nice.

As for the idea of having Spain and portugal as a single faction in game, like ANZAC, the only problem I see is that many units will be redundant.

Oh boy, they had Marder 1. Would be a fun nation