I'll try to bring some stuff that might help you get more idea about the IDF...

Here's a little thing that is unique to the IDF in recent times (since 90's):

This helmet cover is used by almost all the INF units. 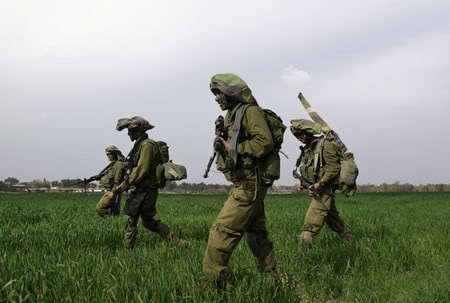 Hope to see it integrated into the game, I don't like seeing INF wearing barrets in a middle of a war.. It's odd

QUAD wrote:Cosmetically the Merkava reminds me of a Sheridan that does roids, and this makes me very happy.

It looks really weird whats it for?
Top

That's an interesting helmet cover, is the purpose of it to break up the helmet outline?
My mouth is moving, but nothing relevant is coming out. Also I cannot guarantee that my research is perfect or even remotely accurate.

EDIT: the soldier on the deck doesn't look israeli at all. though we have different ethnicities, the biggest ethnicities in israel are and mixed europians and middle eastern ones as well as a big chunk of russians, this guy looks off scene compeltely. While i assume there are a few soldiers looking like that serving in our forces as well as asians, and etc, 99.999% don't look like that. this guy clearly isnt.

Here's what most Tzanhanim soldiers look like, while they all look different in ethnic makeup i hope you can see my point from looking at some of the group photos of soldiers here.
General google


Here are some sources for pictures with a Hebrew google search and sites.
So i hope you can find some stuff here you didnt find using english google search:
(note: i thought it'd take me a few minutes but in reality it takes way loner than i thought so i stopped in the middle and just gave the most relevant stuff i could)

Great site that has extensive galleries about the israeli weapons (includes EVERYTHING):
Use the small navigation menu on the right with the small letters to get to different categories, the browsing is a little fucked up but there's lots of good info and pictures

Pereh ATGM carrier:
Fantastic in depth video and some pics

When is the next preview?

It hasn't been more than 2 weeks since they announced it. I believe we are less than half way.

CornProducts wrote:It hasn't been more than 2 weeks since they announced it. I believe we are less than half way.

The Pack is unliquely to come until the end of August.