Ok guys a total of 662 guys voted their brains out and this is your harvest. 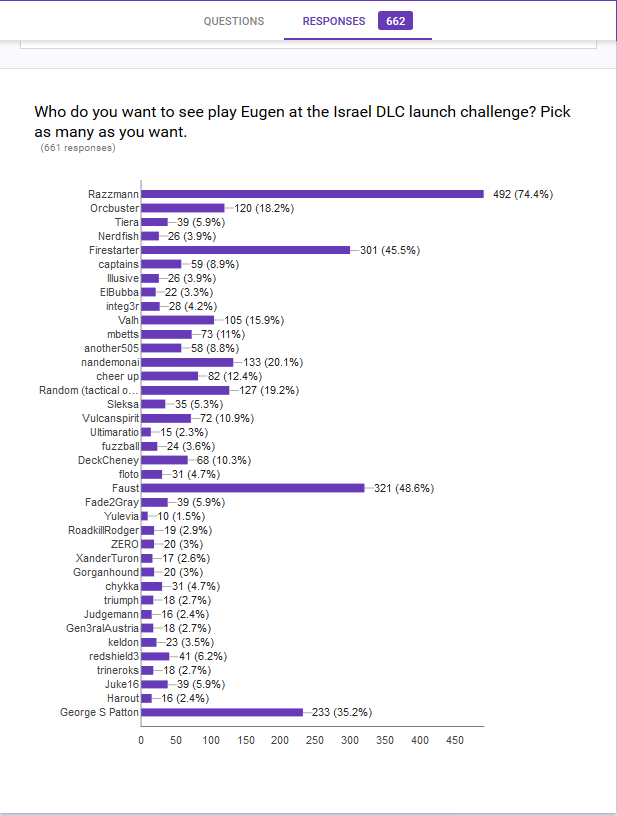 1: So, In the lead by a fair margin we have razzmann with a total of 492 votes. Apparently sexy german accent does it for you guys. I see no other explanation.

2: Second is a dirty goddamn Reddit mod. But Faust is also Razzmanns waifu (But his heart is MINE I TELL YOU) so it's okay.

3: Every Feast needs a fair bit of Salt, although the potential amount Firestarter can bring to bear could kill. Let's keep him happy alright?

4: I'm not even going to comment on Patton. You guys brought this on yourselves. Democracy is a sham.

5: Another one of Razzmanns lovers at number 5. Yell NANDEMANN FOREVER to declare your OTP.

6: You know what? I refuse to further partake in this meme. Strategic Outmanouver is the new hot Random thing,

7: I didn't know you guys cared

Scrubbiest player on the list and possibly in all of wargame.

So likely teamups are

I hope you're happy with yourselves

This is just like PE class all over again

Gorganhound wrote:This is just like PE class all over again

Subjecting yourself to the ridicule of democracy was your own choice.

1v1 me for Razzmann's heart

Thanks too everyone who voted ^^

Everybody that didn't vote for me can shove it.
The USA is #1 exporter of freedom!
All other countries have inferior freedom!
Top

MadMat will be on the EUGEN team, right?

Think you have what it takes to enlist into the military? You sure about that?
Top
Post Reply
31 posts