terror51247 wrote:South koreans didnt have m900.What other ammo can they be using other than m833?

I would guess m900. Many "modern" tanks have ammo that their country didn't have at the time(or ever).

terror51247 wrote:South koreans didnt have m900.What other ammo can they be using other than m833?

I would guess m900. Many "modern" tanks have ammo that their country didn't have at the time(or ever).

The thing is that few 105mm guns can fire m900.M48 probably couldnt.
How can anyone play to a faction's strength if the major flavour of that faction is overpriced units in every category?
Top

KM68A1, at least for the later upgrades.
Top

The WRSA has the M68A1 ingame, so it should be fine I guess?

delfo wrote:I am not seeing the petition page where you ask the Serb Army not to downgrade the M84 and M84A's FCS and stabilisation by upgrading it to M84AS.

Cause I'd like to see that at this point given how you stood by your values and did research by comparing the other vehicles in the game.

That's a FAQ I can assure you a lot of the old regulars have at this point.

Now I will really be done with this forum because when I see someone yell at me for 6 hours what are the stats and that he did research but didn't even bother checking the stats of the system they are upgrading to inside the game is too much for me...

Research... Opening the game and double checking values is due diligence. Add that to the FAQ.


This is crazier than when I watched the 300 release event in Thess with one particular guy from Tetovo or when I asked one guy from Shkodra about Skanderberg's relatives...

1. "M84AS" has the DNNS-2A sight = same fcs. Feel free to check the pics yourself. TOMS is an extra addition.
2. M-84AB1, as it's proper name is, was a RUSSIAN (yes you read it right) attempt of scoring Kuwaiti cash by slapping on K5 ERA modules of T-90s onto a M-84 loaned to Yugoimport, so that they could call it "Serbian indigenous modification", as that particular Russian company was blacklisted by Kuwait.
3. End result: Yugoimport is now blacklisted by Kuwait as well.
4. Russian company stripped the tank.
5. Yugoimport "somehow" obtained all the parts back up, but with no buyers anywhere (M-84 is a rare piece of kit), it is just being paraded around weapon expos for shits n' giggles. Serbian Army is not interested in the slightest.

Why is this a matter of discussion? It is a 2000s thing, what does the Wikipedia say?

I will point you in the direction of the 240-and-growing pages of Yugo discussion, where you can read all about it, and more. Or not. At any rate, you may go lament about три морета or whatever you enjoy somewhere else.

I can give you a few things.

You put your unicorn of make belief stats on paper 2 years before any other 70 acc tank in the world.

Because in your infinite wisdom you introduced about the least researched DLC in wargame. Got that ?

Let me explain it to you. 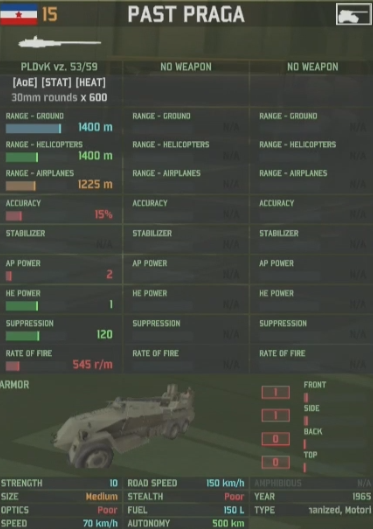 Because you have no idea or a clue how HEAT works in Wargame, because you didn't even bother you went off the stats from the manual. You didn't care about real research.

My dear greater serbia warrior I didn't bother checking that because you're off by 15% in the baseline stats for the T-90S and I don't see even considered bothering looking it up. Why? Cause 15%. That simple. In Wargame terms you're bound by that 15%. Deal with it. Did you deal with it ? No you pulled a Miloshevich and broke the stuff.

Back to your 240 pages of Yugo Serb nostalgia which you continuously mention . Which brings us back to the uber on paper failed at a challenge versus Leo2s DNNS-2A sight which in the imaginarium of doctor strange AK somehow beat the best in the world 2 years prior at reduced cost. Never minds the T90s are still using SOSNA U or Thales but stole from Yugoimport to prove a point I guess I remember that because I dug it up to find the bill of materials as to how modernising a T72B3 was so expensive, but that was something I cared for, this ode to the glory of the Yugoimport interest me as much as the Bulgarians championing the resurrection of Zhivkovism...

Let me be frank I didn't bother to check. Got me on that one. Yey. 1 for you. Enjoy it. Cause I didn't bother checking and every long term player would still back me on how much crap the stats are. I failed miserably, did no research on the parts and yey I am still one up in the grand scale of things. Here let me tell it again I was totally and completely wrong. And I am still not wrong about the Wargame stats. Damn.

But you re-engaged me with the same you can do no wrong on that plaster donkey you call a high horse. For which I am grateful. I can be incredibly vile and obnoxious without using a single swear word. I have no friends. They died, true story. Not related but in case you bring it up. And here is my vile puddle of bile against this contraption of power super creep, world wide inconsistency and not a clue on how Wargame even works. 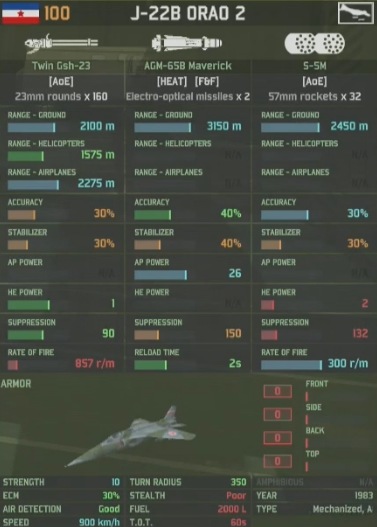 Because the Logan act ? Never heard of it! Hey I am wrong again. Two for you. I just checked. You still broke the game but enjoy. Boy was the Carter administration weird. The year you're dating it is as if it was a proto but like I said was wrong Two for you. You got 2 on me. And it only took a broken game.

Then you sprinkled this : 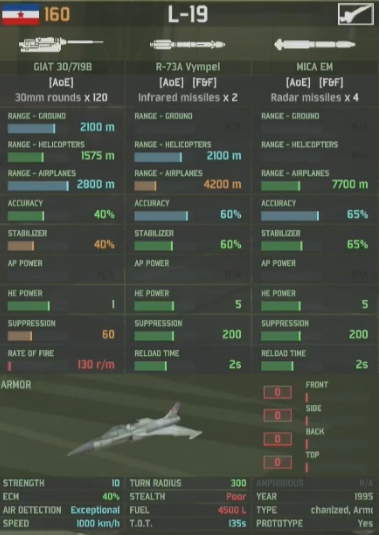 Because France would sell you embargoed radar and stuff ( like how you got superior FCS and Stabilisation as an export from a country than their classified domestic stuff) because I guess you assumed in that timeline the French government and defence industry would be blowing Miloshevich and asking for more and would hand you classified stuff like that. 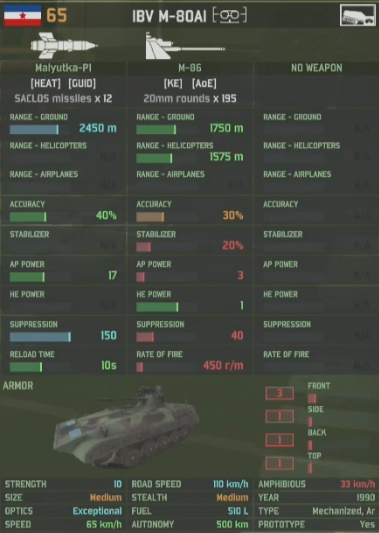 Best autocannon in the world! No wait. It's not because it never existed. 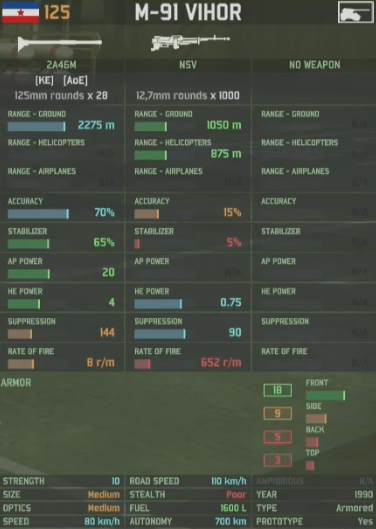 Export wonders galore of secret tech that makes you beat the M1A2 and Leclrec... Why yes that is 1990. With a zero at the end. 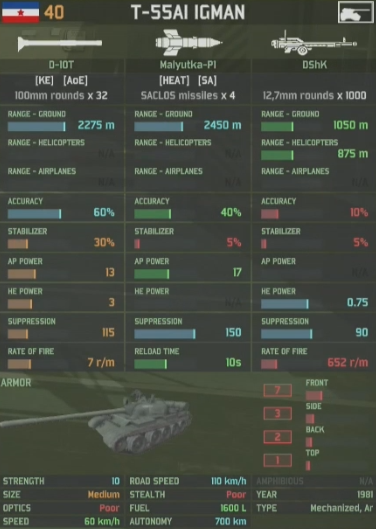 Because this screams balance like I nobody's business in 1981. Cat C here we come! How did you come to be so accurate in 1981? Is it a bug after all this research for months that made it into prod anyway ?

You produced a 15 Autocannon heat vehicle for the lineup ?

HEAT ? Really. HEAT in wargame on an autocanon? Read through that. Call it research.

You created the best sniping program in the world on a 20 mm cannon that outperforms a Tunguzka. 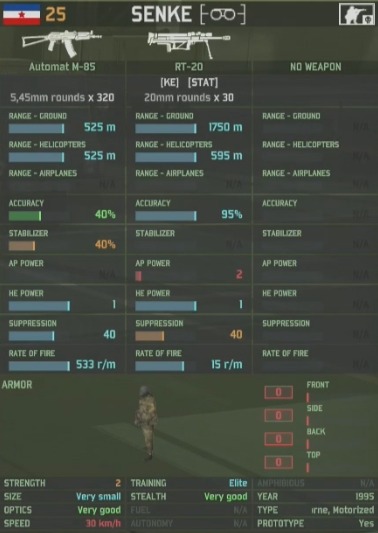 Have you handled a bolt action rifle at an indoor firing range even ?

You stand by your vaunted FCS and Stabilisation when no other vehicle prior to nation DLCs for cash adhered to that scale. Bleep it you added this: 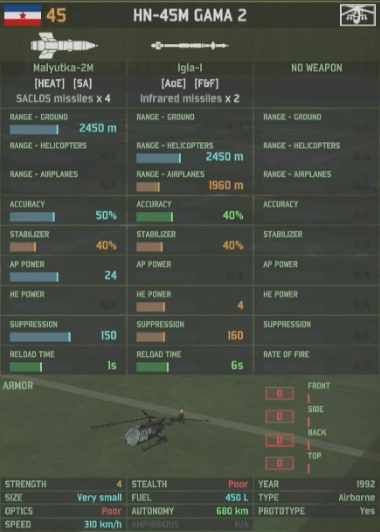 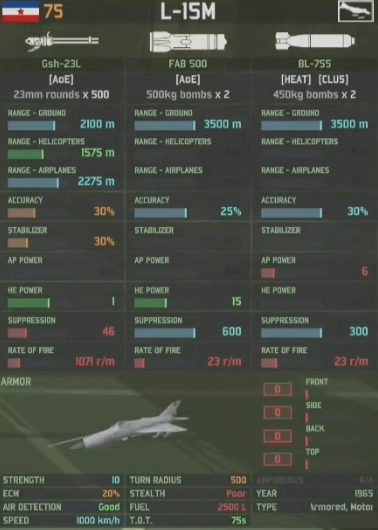 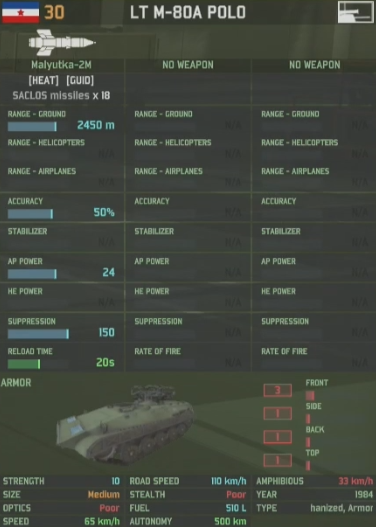 Cause you wanted fries with that?

Wikipedia warrior. No I wasn't. I didn't bother checking. I really REAALLY didn't. And I ain't that ashamed of it. Cause this DLC stinks to the high heavens. You literally broke all game rules in one go. Go dig up the stuff I posted on Bulgaria and find the books I used online. No even better find it's bloody name off the pics. I didn't bother with looking it up because your entire premise that you could cobble up a superior FCS and Stabilisation. Why cause Yugoslavia that's why.

Israel was pushing it ? But that was too hot and I was pissed at a neo nazi issue on the forum ?

This, the line is a dot to you. Do you get it? THE LINE IS A DOT. All your armored atgm vehicles come with 18 missiles ? What research ? Are you better than 20 other nations in the world who accepted yeah sure we'll go with 8 to 12 missiles in our vehicles and say fine in Wargame? Have you considered the supply implications of that in game ? Research, opinion polling, not breaking a thing for your own personal pleasure ? Not Milosheviching up the place?

15 point throw away vehicle that at 1 km gets accurate enough in its burst to mop the floor with every tank in the game if it fires first.

Research ? Come again? Making a reality your wet dream of uber yugo mensch isn't research do you get that ? Mica on the Novi avion in 1992 ? What is ignore geopolitics for 200 Trebek I dare ask mustering my best Sean Connery impression.

Does anyone have any idea what delfo is on about? Outside of obvious stat mistakes like the HEAT praga, I'm really not sure. Also he keeps bringing up the RT-20, has he ever heard of Recce?
Top

yeah, half the units have retarded stats considering their timeframe of entry and actual measured performance in real life competitions.

Something about friends, death and loneliness, I think.

Maybe him and HrcAK47 can cool off for a bit.

yeah, half the units have retarded stats considering their timeframe of entry and actual measured performance in real life competitions

I don't really see anything wrong with the stats as compared to already existing units, and the Swedes reported the FCS as being better then that on the leo 2.
Top
Post Reply
152 posts