I've been modding Wargame and the suggestion of a Kilshon bounced a few time on me, for people not familiar with glorious israeli designs, the Kilshon is this beauty: 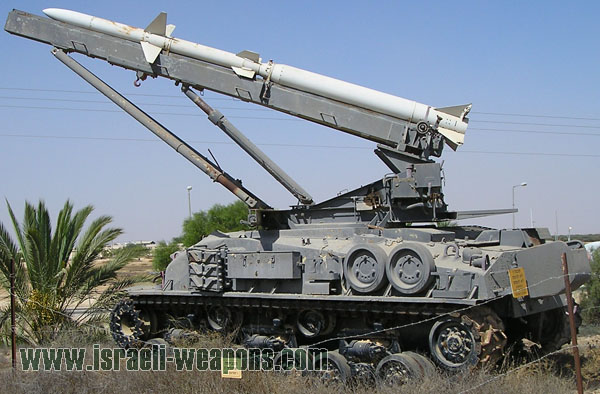 It's an AGM-45 Shrike, anti-radar missile, strapped on top of a M-50 Sherman chassis. Basically a ground SEAD.

Stream of consciousness before implementation:
- You can add missiles to ground units
- You can indirect fire with artillery
- What if we combine a missile with an artillery system (a rocket mainly) ?

Alright let's do it. First we need to create a new weapon (TAmmunition) to not ruin the AGM-45 already in-game. I never use the "copy" function, as it will copy other modules nested in the TAmmunition. You better create a new one and start from scratch to avoid any problem.
This is the TAmmunition I made:
http://imgur.com/a/9L4qU

Now, we need to find a suitable unit to use this monster. What about the MAR-240 ? It's shit, it's a Sherman hull and and it's IDF. Perfect !
I repurposed the MAR-240 TMountedWeaponDescriptor this way:
http://imgur.com/a/kG8IV

You can already launch a game and test the missile, but in my experience you will always get a "Turret angle is too high" problem, so I got back to the files and I changed the TTurretTwoAxisDescriptor of the MAR-240:
http://imgur.com/a/PX0Am
Don't forget to add a salvo, and now we can field test the Kilshon !

http://imgur.com/a/VTHRW
You should have WAY MORE range ! This is a picture of a downgraded version (more testing).

So what do we expect to happen ? Well, normally the vehicle will fire at any radar target (guidance 2, it's SEAD) you can detect, regardless of LoS.
A "null" aim time allows for immediate fire when detection occurs.
With a perfect dispersion, the missile should always hit. And the F&F tag should dispense the need to keep LoS on target.

This happened for a couple of times while the AI was calling in radar units and I was shooting them down from afar, another picture to illustrate the reproductability:
http://imgur.com/a/fk6SM

So far it worked, with the following issues:
- Your vehicle need to be perfectly in front of the target in order to aim and fire a shot. It might be something to do with the TTurretTwoAxisDescriptor parameters I entered.
- Sometimes the Kilshon won't fire and you will need to designate the targets for him, example in picture:
http://imgur.com/a/FGmaF

I believe it needs more testing and fine tuning, but doing an NLOS missile seems very much possible.

Well, I guess that's it. I don't know if it was already done or tried, but I wanted to share anyway, it can't hurt (I guess).

First thanks goes to Eugen, Wargame is an awesome saga and the capabilities of the engine are insane despite all the flak it gets.
Also big thanks to Hob and Enohka for making modding possible.
Thank you to the tutorial makers: Guggy, Darkmil, W:AB noob and others I can't mention from memory.
Top

Re: How to make your own Kilshon