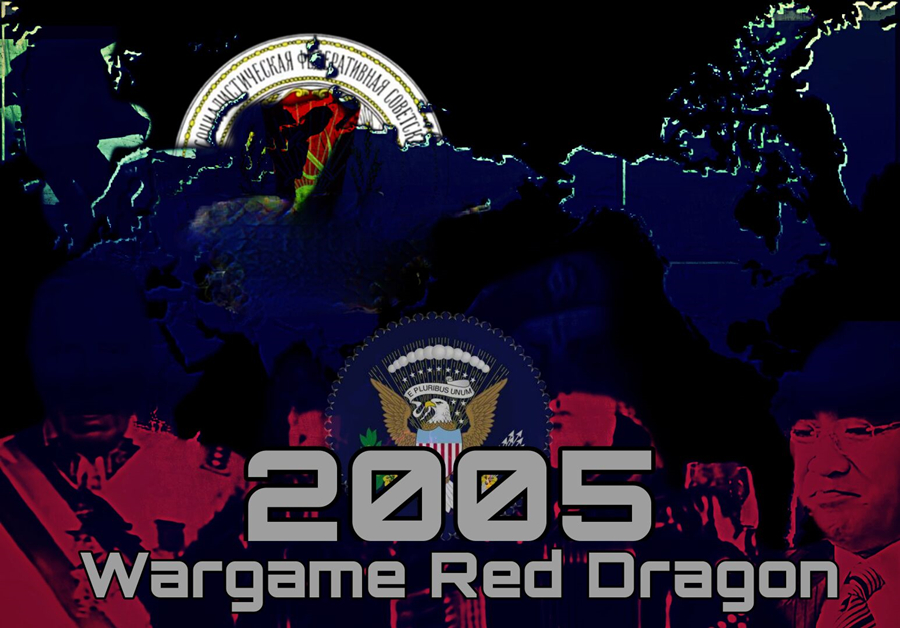 INTRODUCTION:
Wargame millennium is generally based on the original WGRD game but has extended the time limit to year 2005, allowing more interesting units to be added at the same time making the existence of some vanilla units to be more reasonable without compromising the core red dragon game play style and balancing. Millennium mod also featured addition of new nations such as Italy and MEA meanwhile retaining the features of vanilla nations and collations.

Background:
In the timeline of Millennium world, Soviet leader Yuri Andropov stayed healthy and initiated a series of radical reform which achieved remarkable results. Soviet regained the initiative of cold War. At the same time, with the failed military intervention in Middle East, the new US administration turns to conservative foreign policy. With the US influence gradually falling in Europe forces the other NATO members are forced to strengthen their military cooperation in west Europe with the West Germany as the leading nation. Although Yugoslavia lost Tito, his successor keeps Yugoslavia running thanks to the aid from Soviet. The Middle East coalition emerged during the 3rd oil crisis; it has been firmly stood with the Soviet after US intervention.
In the far East, China and the USSR reached the Second Sino-Soviet treaty as the west announced embargo after 1989 incidences. Taiwan become the frontline to stop the spreading of communism in Asia and its defense capability greatly improved with the arrival of advanced US weaponry. There are two emerging players in the southern hemisphere, South Africa and Southern Cone. South Africa endured the turmoil in 90s, their leaders realized the seriousness of the national problem and adopted some reconciliation and egalitarian polices which achieved successes, with the lifting of international trade ban, South Africa entered a prosperous new era. Chile and Argentine resolved their difference and formed a new political and military alliance- Southern Cone to encounter their common enemy -communism. Yes, no one knows where the world is going.

Major Changes on original WGRD factions:
US (and Canada)
US in 2005 received more high-tech military equipment which would have otherwise entered service if the cold war continues, such as RAH66 Comanche, XM2001 Crusader and XM8 rifle. The infantry tab being the shortcoming in the vanilla game has also been improved with the merging of Canadian units and the adjustment of US infantry. Overall, the general capability of US has raised to the top tier. 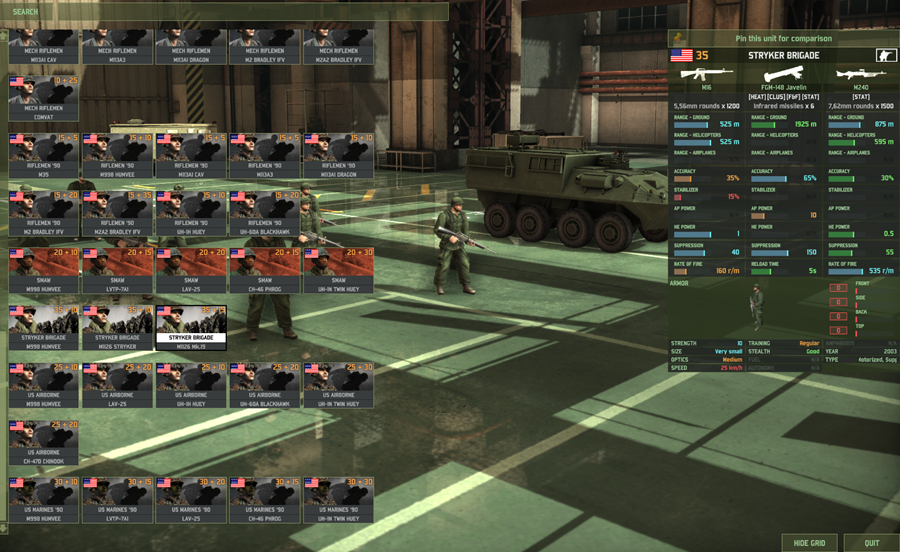 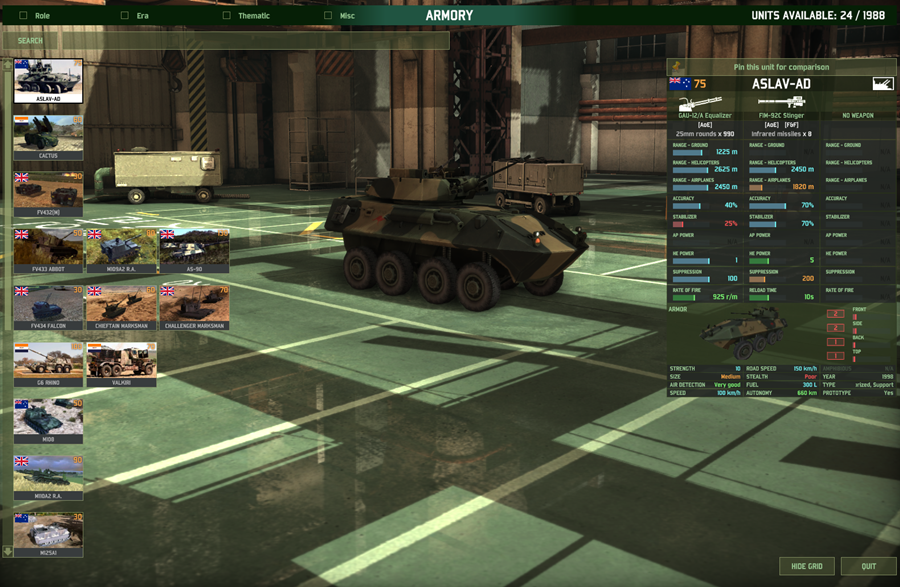 EUROCORP (FRG, FR)
The change on Eurocorp is minimal as it has been very capable in the original WGRD. However, some improvement on AIR and SUPPORT tab is made, we see the introduction of more ground attack loadout aircraft variants and long range SAM. Other changes are kept minimal, yet those small changes make the faction more fun and realistic. 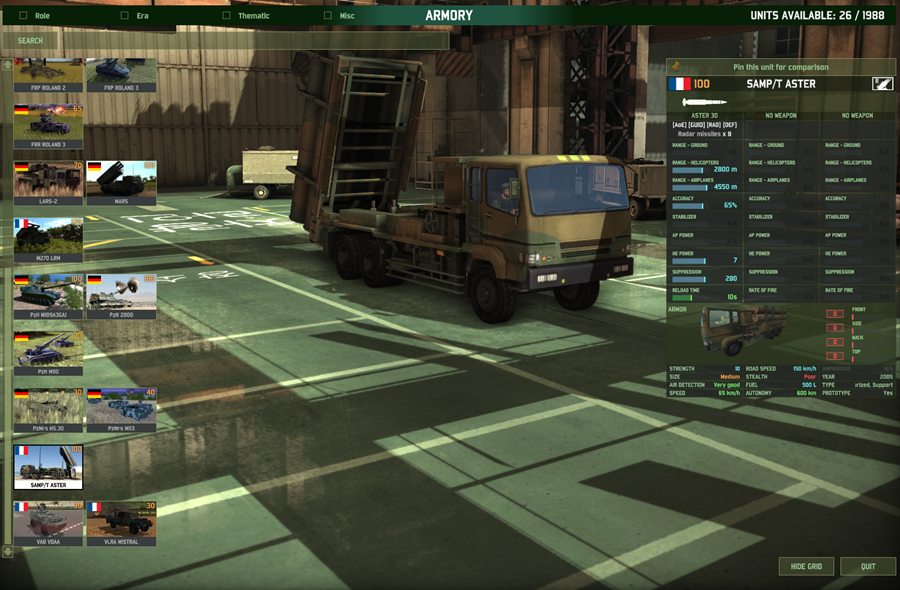 SCANDI
The pervious 3 Scandi nations are merged into a single Scandinavian coalition. The core units and gameplay style are retained, and we see the mighty STRV2000 tank being added as the new super heavy for Scandi. 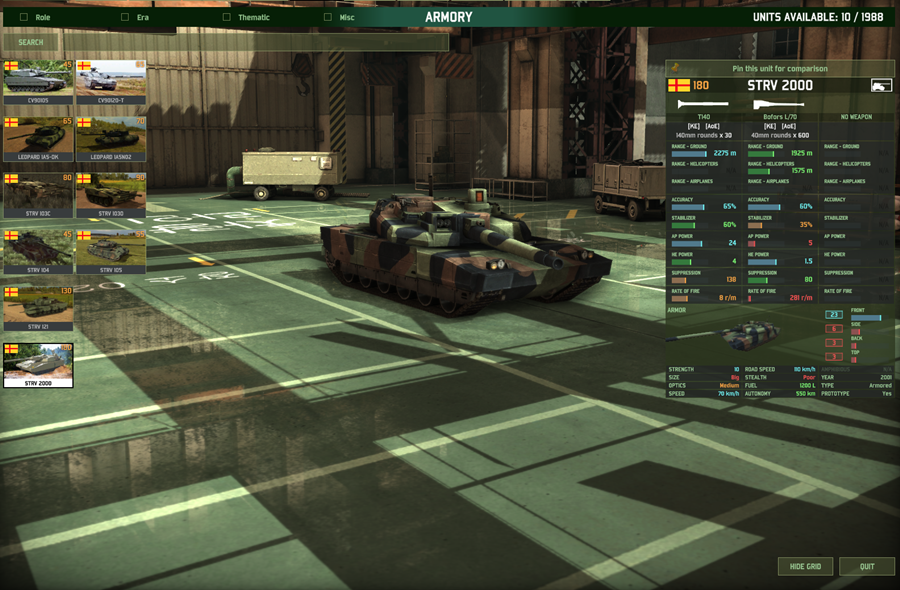 BLUEDRAGON
The overall statistics of Blue dragon is generally unchanged but inspired by a famous Korean TV show there are some interesting tweaks on Korean infantry tab. 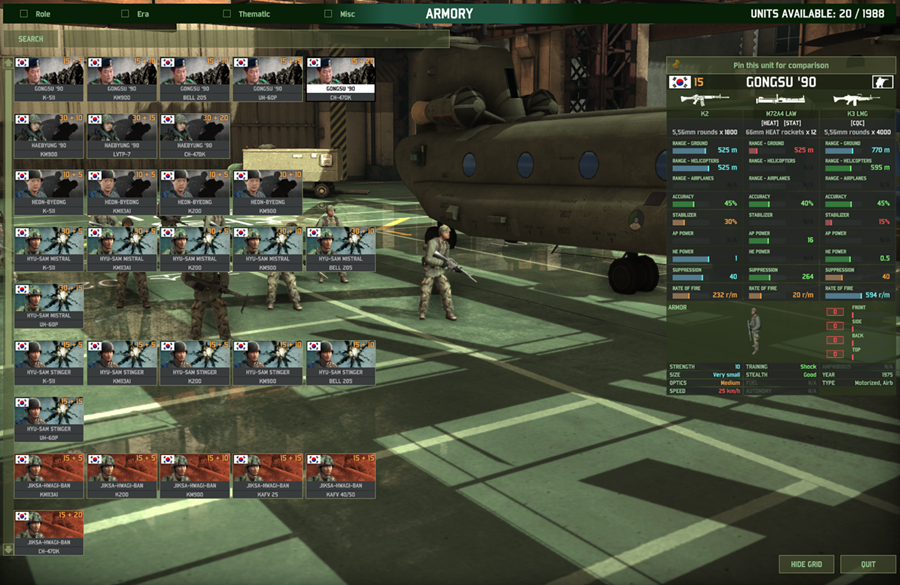 ISR
Israel is generally unchanged as it has been capable in the original WGRD, yet the infantries are modernized to comply with changing of the general timeline. 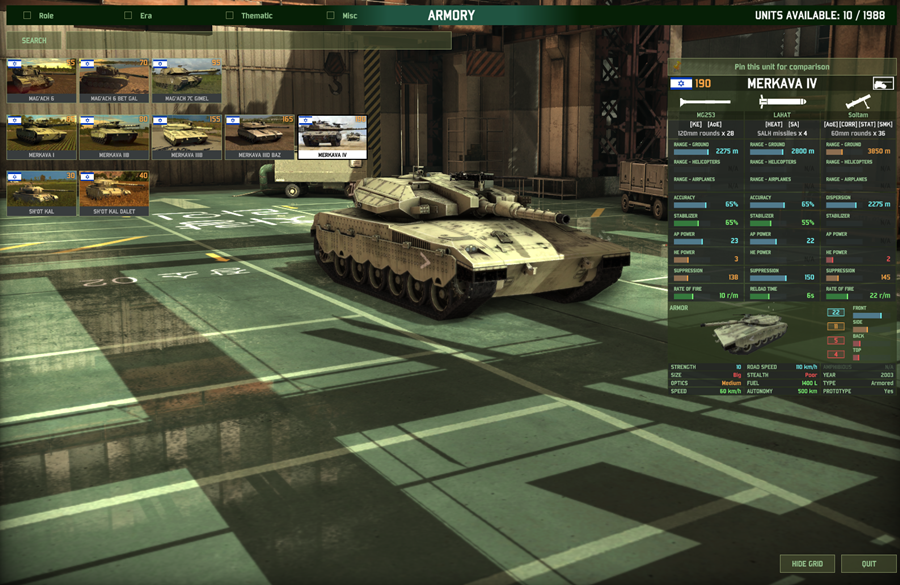 USSR
Similar to US, soviet received their big toys such as S300 SAM, Obj640 tank and modern variant of BMPT. Some adjustment on other sections are also made to make certain units’ performance more reasonable. Overall, soviet’s characteristic of expensive but deadly is retained and explored. 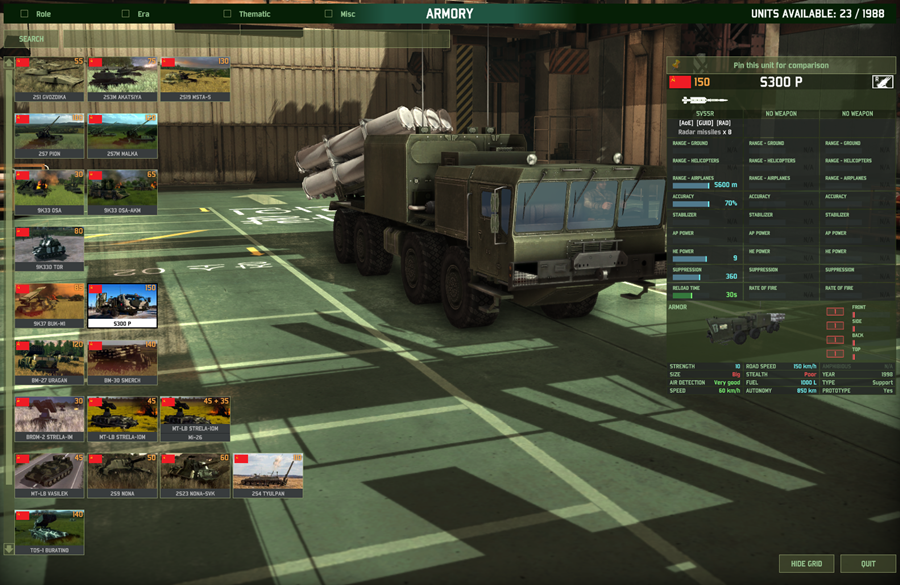 RED DRAGON
China being the core of red dragon faction has been greatly improved in compliance to the extended timeline, new units are added to make up for the shorting coming of the nation such as Type99 MBT, PHZ03 MLRS etc. North Korea has a clear characteristic being mounting manpad missile on most of its units, there are improvements on NK’s support tab too, Taepodong missile is added as NK’s heaviest firepower. 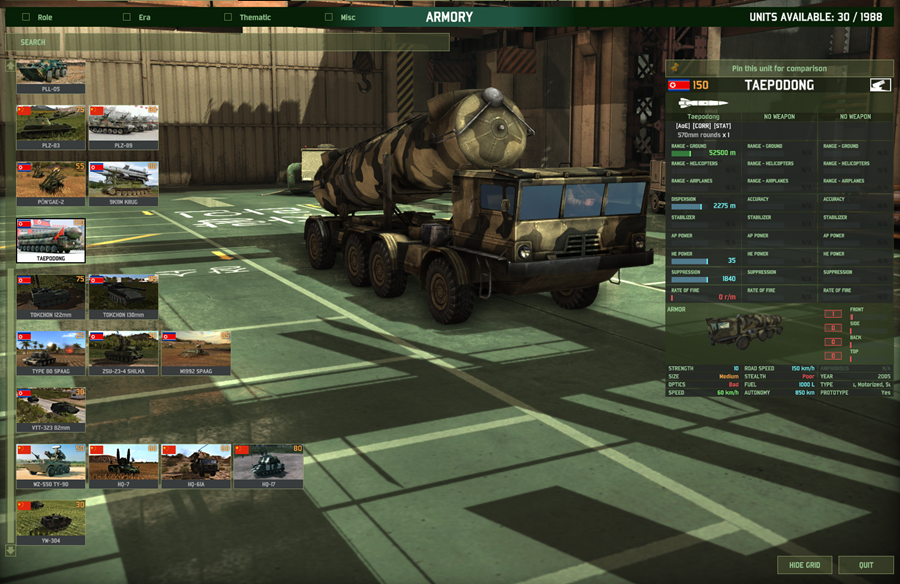 EASTERN BLOCK (Baltic-Exine Front & DDR)
Baltic-Exine front is the coalition of Czechoslovakia, Poland and newly added Hungary, Bulgaria, Romania. The units from Czech and Poland are mostly kept, units from the southern Europe are added making the coalition more diverse and featured. The DDR in 2005 has become the backbone of WASAW PACT, featuring the addition of advanced soviet weaponry, its infantry is also trained and well equipped, suitable for both mechanized and motorized combat. 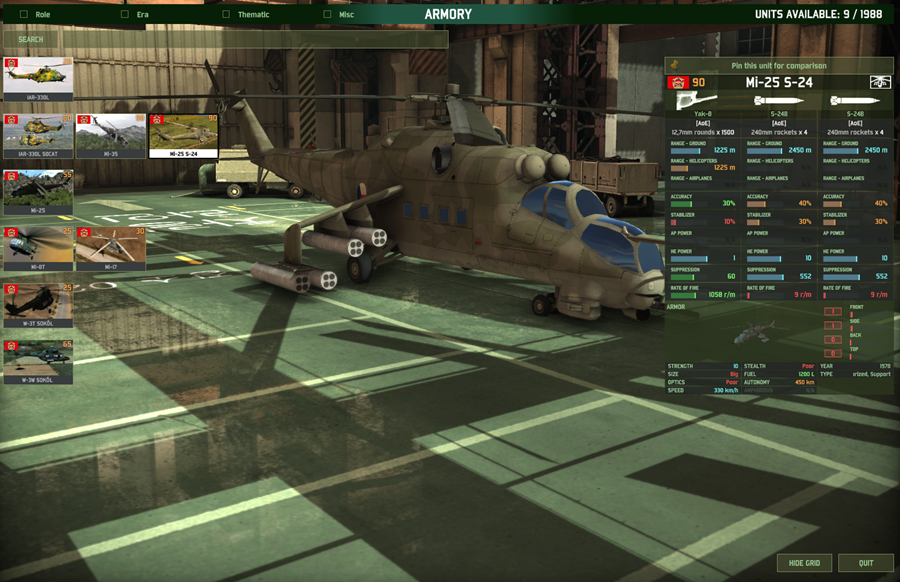 FIN
With Poland merging into Baltic Euxine front, Finland’s capability is improved to be able fight alone, some new units are added to make up the missing polish units, such as leopard2 tank, leopard marksman, lynx Heli etc. 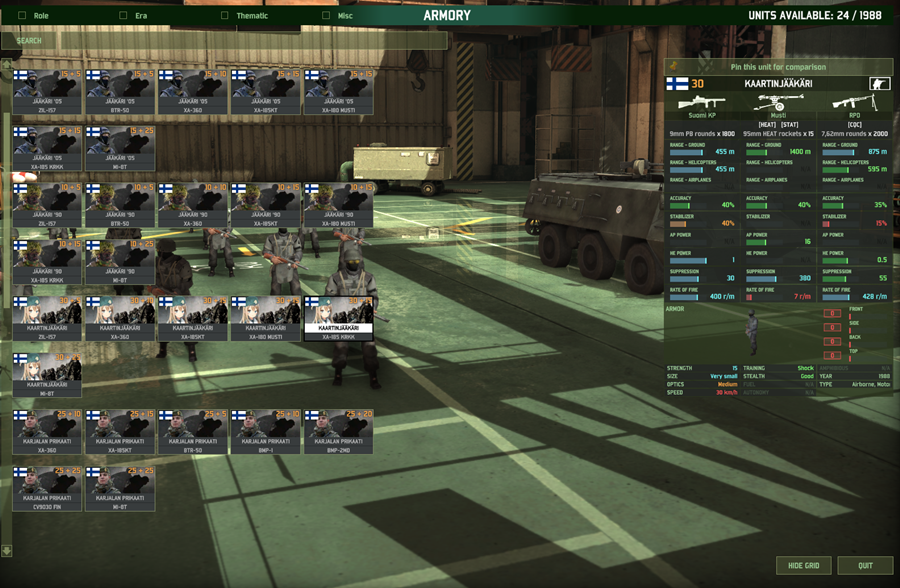 YUGO
Yugoslavia is mostly unchanged as it has been very capable in the original WGRD, only some minor tweaks on infantry is made to comply with mod’s timeline. 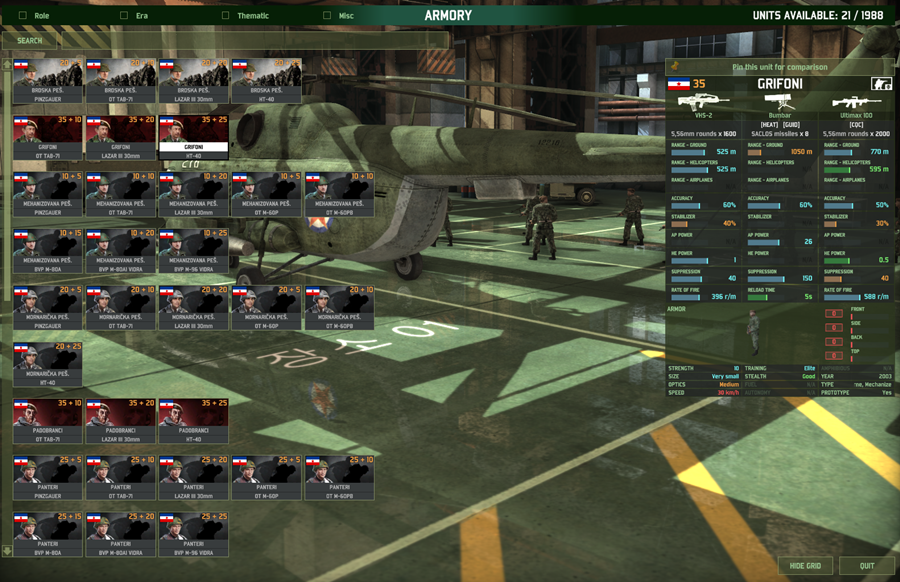 New-added Millennium mod factions:
Republic of China
The republic of China is designed to play a more defensive role as they are in the real world, featuring advanced and systemized air defense equipment and capable fixed wing and Heli force. However, it lacks heavy armor and IFV, limiting its attacking capability. 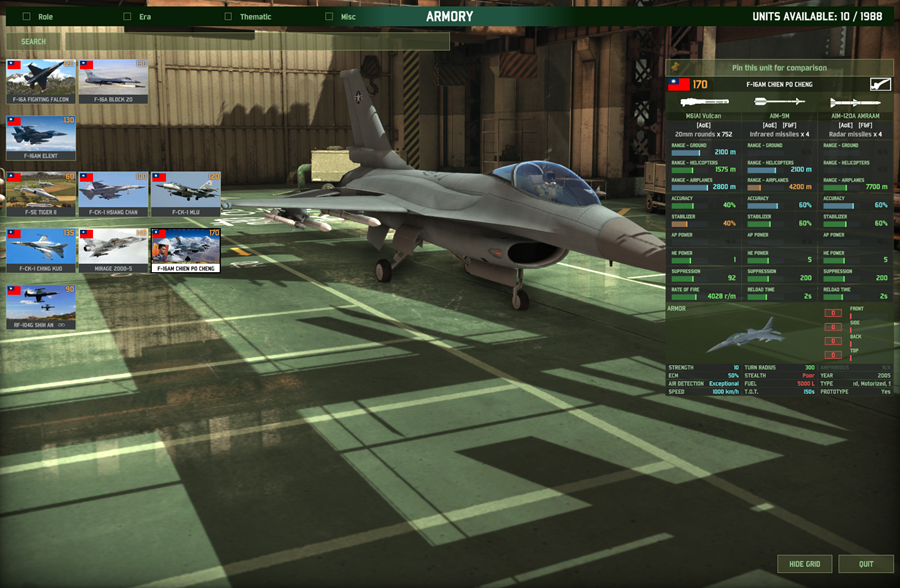 Southern Cone (Chile-Argentine)
The Southern Cone being the coalition of Chile and Argentine featured mostly second-hand European, Israel and American weaponry and some home-made weapon. However, the upgraded old weaponry often brings unexpected performance in the battlefield, such as Sherman M60 and Canberra bomber. 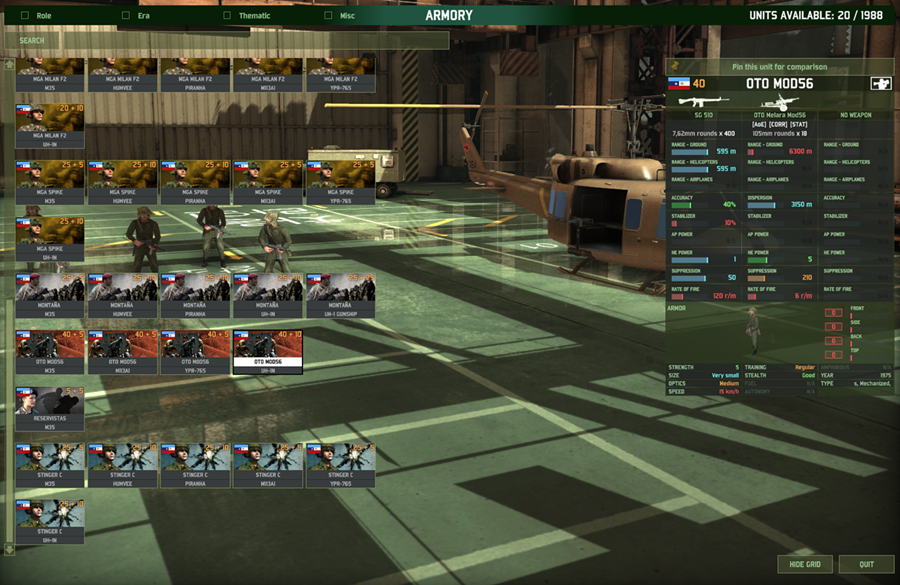 South Africa
South Africa developed a systemized defense industry during the period of international embargo and closely cooperated with the Israelian, their forces are equipped with featured home-made weaponry, making it suitable for mobile and swift strikes. 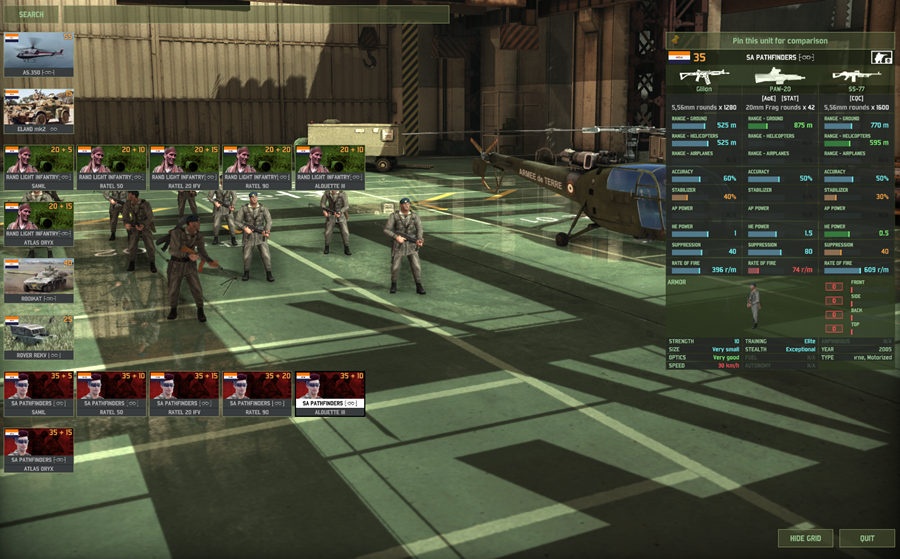 Italy
Italy replaced Netherland in Millennium, similar to Netherland, Italian has a very capable force in all sectors, at the same time, many Italian originated equipment found their home in Italy such as Otomatic and fiat vehicles, along with other Italian weapons providing a immersive gameplay. 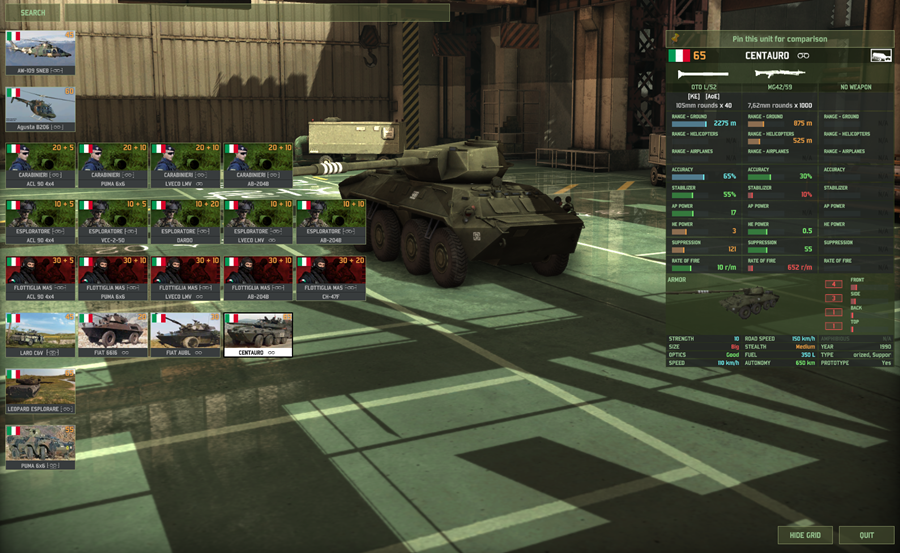 Middle East Alliance (Egypt, Iraq, Iran, Syria)
Middle East Alliance is the coalition of Egypt, Iraq, Iran and Syria, this faction has many distinguishable local and foreign imported weaponry form both West and East, despite most equipment is outdated and incapable in the modern conflict, the domestic modifications and upgrades made those old pieces keep shining in the battlefield. 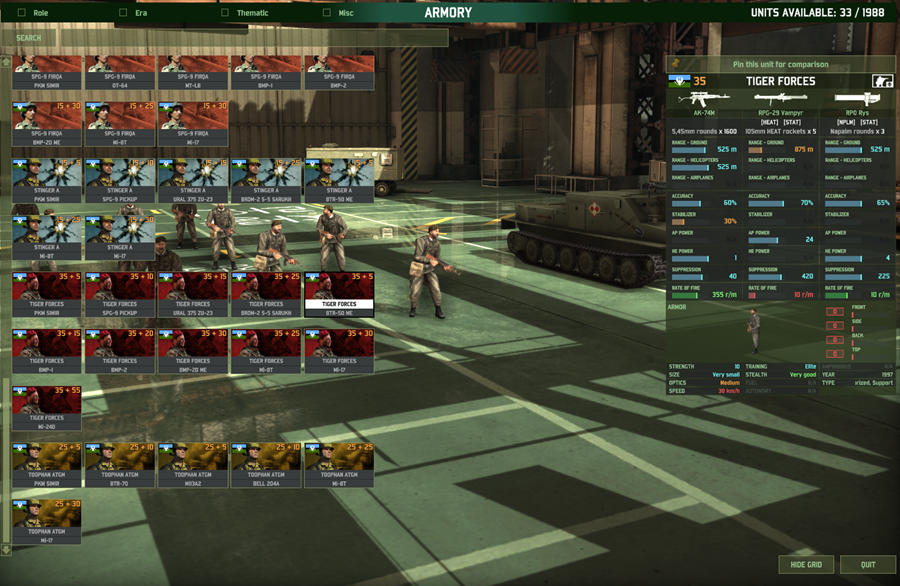 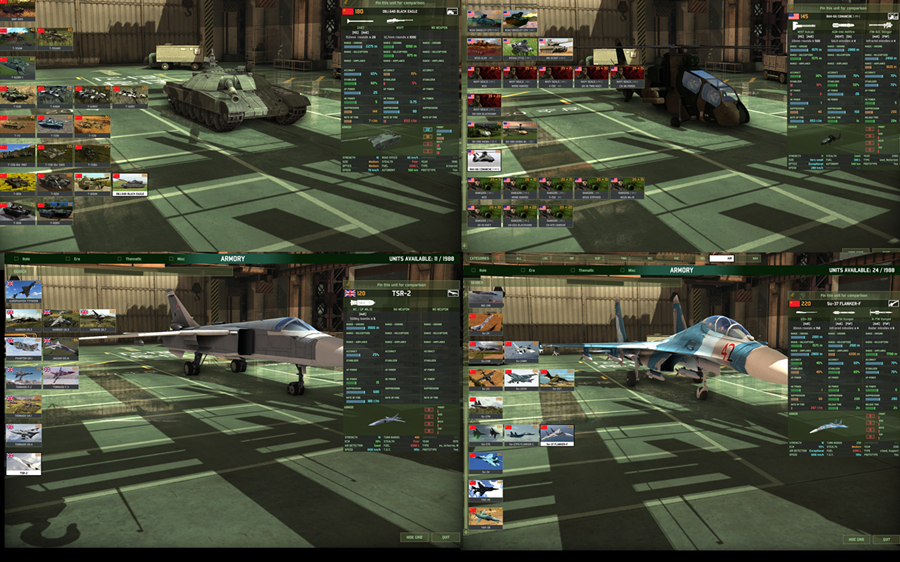 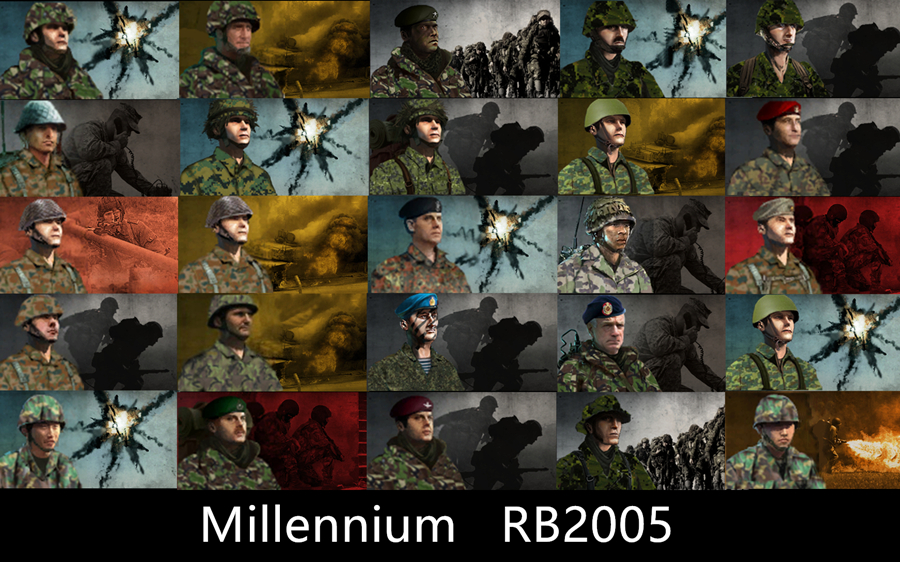 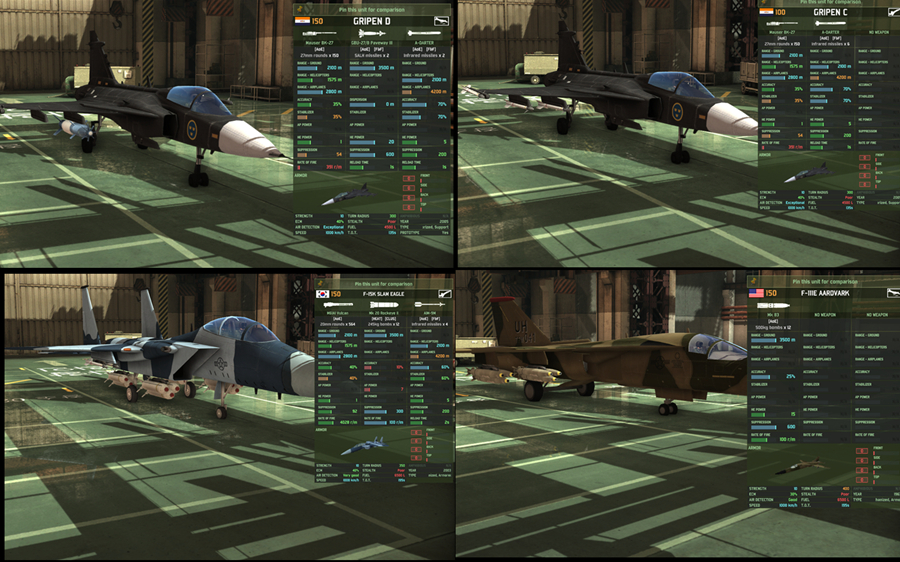 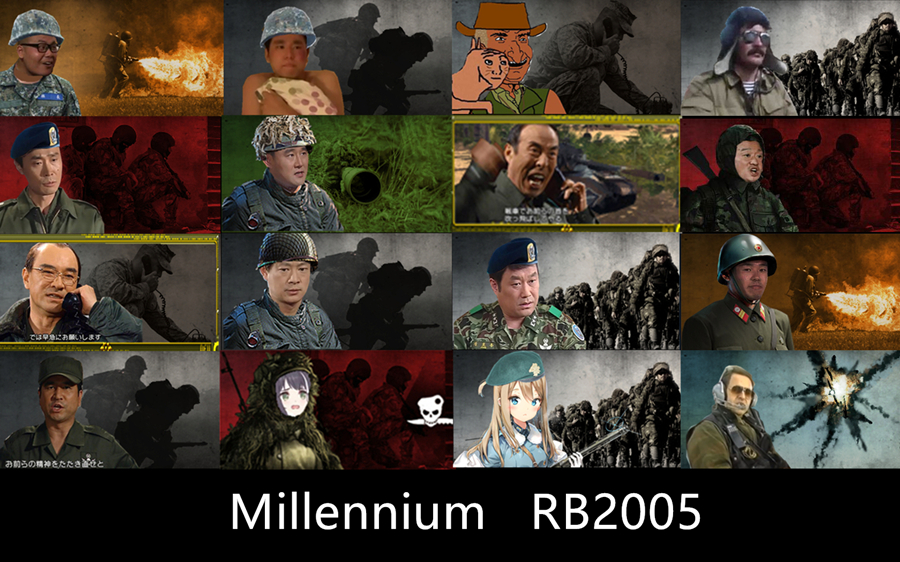 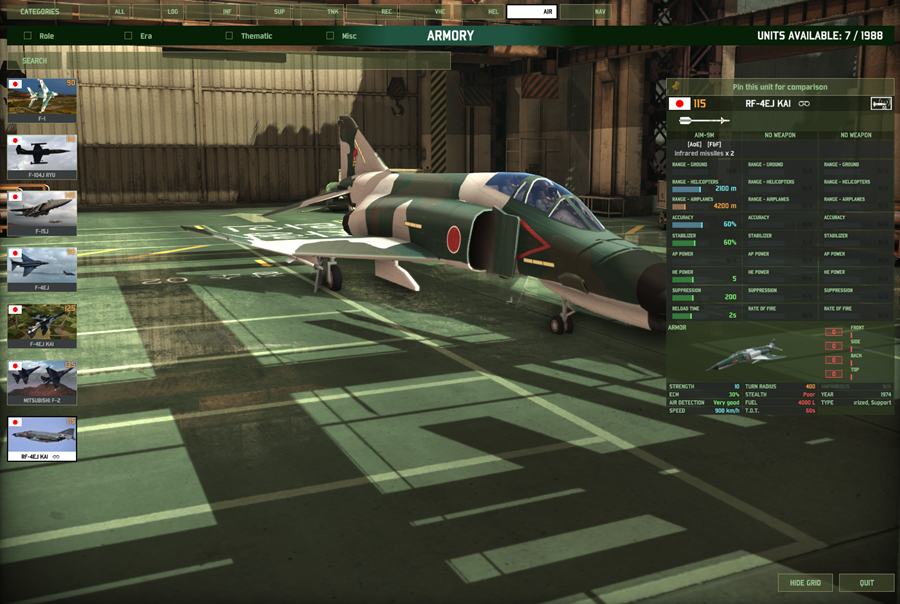 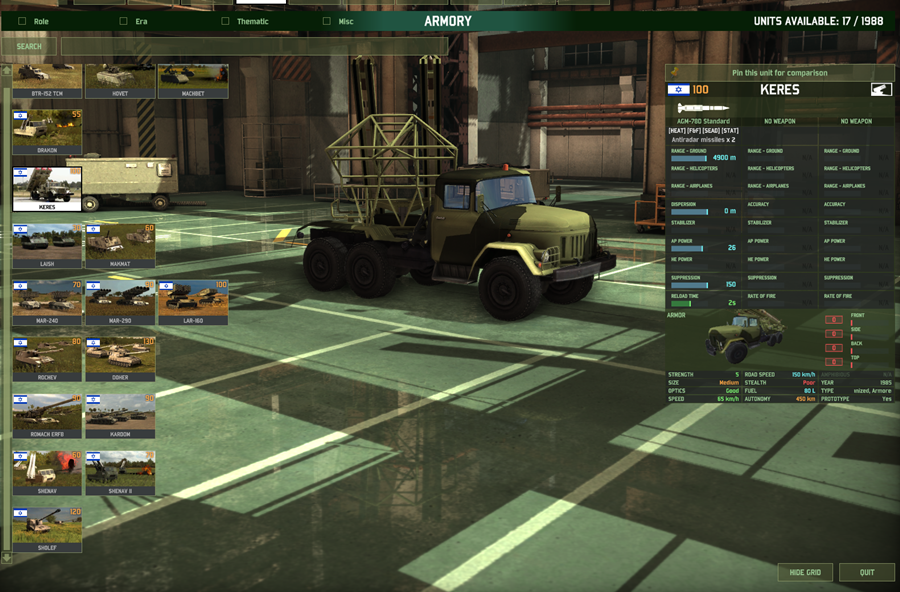 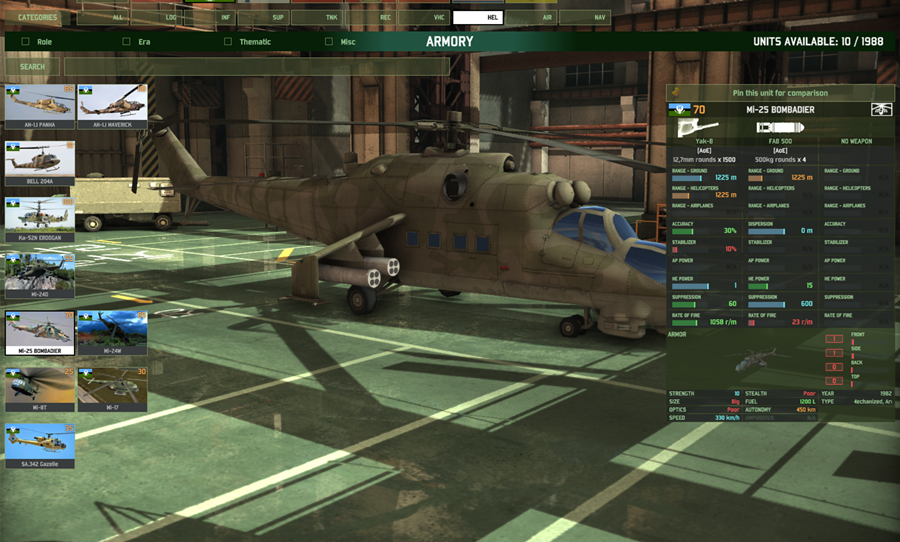 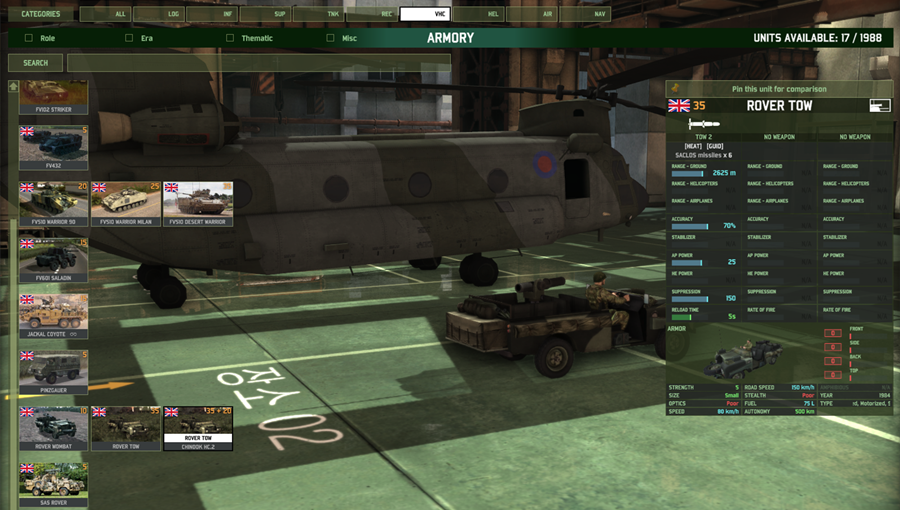 Installation:
Unzip the zip file to a new folder, run the installer ‘war game mod manager’, follow the instruction to select your wargame red dragon folder, and select ‘rb2005’ to start the millennium mod. (this mod will not interfere and damage your deck presets in the original game)
To uninstall the mod, start the WGMM installer and select ‘vanilla’ to switch back to the original game.

Feedbacks and Suggestions are welcomed!
You are welcomed to join our discord server at https://discord.gg/hUKAp4CaWW

Acknowledgements:
The following members has mad great contribution in the development of this mod:
Random: In charge of the modding of BLUFOR, and most unit and weapon icon art design.
KIAyuyu: In charge of the modding of REDFOR.
PaperCastle: Providing ideas and designs on the modification of nations and units.
ChenYi: Perfecting the background and timeline for the Millennium Mod and writing a fan fiction novel based on the Millennium’s background.

This mod is partly inspired by WG 1991 mod and we appreciate their ideas and designs that has provided us many unit design ideas, and we especially thank ‘Phlogis’ from the 1991 development team who provided us valuable feedbacks and suggestions.
Last edited by random2333 on Fri 5 Mar 2021 14:53, edited 5 times in total.
Top

Very nice, it looks like you put a lot of work into this. I'm glad to see the modding community still alive!
Top

Sireyn wrote:Very nice, it looks like you put a lot of work into this. I'm glad to see the modding community still alive!

It's such a meme mod that even the poster's portrait is a meme.
Will Taiwan military power getting an unique audio?
Top

blackhawkfalled wrote:It's such a meme mod that even the poster's portrait is a meme.
Will Taiwan military power getting an unique audio?

Unfortunatly, due to technical limitation on modding, we are unable to edit audio files in this stage, but we would add different voice lines if we can figure it out.
Top

Hi random2333, your mod is great.
But I think there is some bugs which makes the mod displaying the wrong name. In some case, doesn't display any name.
Like this: https://i.imgur.com/ZoAD72o.png
Do you have any idea how to fix that?
Top

blackhawkfalled wrote:Hi random2333, your mod is great.
But I think there is some bugs which makes the mod displaying the wrong name. In some case, doesn't display any name.
Like this: https://i.imgur.com/ZoAD72o.png
Do you have any idea how to fix that?

My suggestion is to check the integrity of game's file in steam first, then follow the installation instruction to reinstall the mod., and it would work normally.
Top

I have updated the mod, so it is compatitbale with the lastest version of WGRD.
Top

Is the Modmanager done by yourself?
I mean it will be great if it can also manage other mods.
Top
Post Reply
13 posts

Users browsing this forum: No registered users and 22 guests