Please have another look at the zoom levels

I'm hovering over the purchase button however I have one question about this whole 'zoom' malarkey that i can't find the answer too. 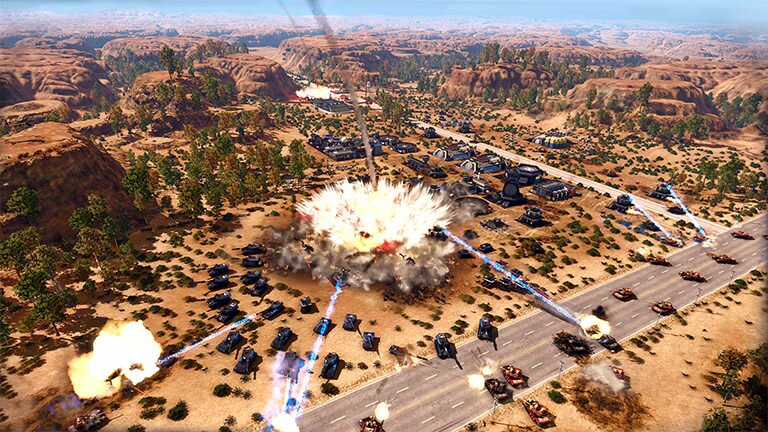 You can see the horizon whereas the ingame videos on YT never display this angle, therefore are you able to tilt the screen or is it locked?

I'm hovering over the purchase button however I have one question about this whole 'zoom' malarkey that i can't find the answer too.

You can see the horizon whereas the ingame videos on YT never display this angle, therefore are you able to tilt the screen or is it locked?

it's locked/glued to the floor.
Top

Zero_GG wrote:+1 But still have hope for a fix

If you keep calling it a "fix", for something which is not a bug, it will lesser its chance to ever happen ...

I hope you wrote that with a little bit of sarcasm. Because if you seriously get angry over someone thinking that the current zoom affects the game in such a negative way that it can be considered as an issue and needs to be "fixed" you should probably take yourself some time and try to understand that there are other people in the world who necessarly does not share the same opinions as you. And even though you might disagree with them they still need to be given respect as they are totally entitled to their own opinions and thoughts.

Though of course we also need to respect Eugens thoughts of the game but it does not limit us from informing you that we believe the current zoom is a real issue and that we do not agree about it being appropriate for the style of gameplay the game delivers.

Furthermore I believe that you're gonna have a hard time making good games in the future if you refuse to implement requested features just because someone, somewhere, expresses him-/herself in a way that do not fit your style of thinking.

With all this said don't take my post too serious, I really don't want to offend anyone on Eugen but I just found your reply a little wierd and a bit rude. If you in the future want to avoid people writing about that they want the zoom to be "fixed" a good idea would be to make a very strong official statement where you describe how the zoom will work and if any further changes may be implemented. Until then I think you will need to respect the fact that many people will be doing everything they can do make you consider modifying the zoom when the game is still in development.

Dude, it was clearly meant with a hint of sarcasm and simply done to inform the person that it's not a bug... And he tried to do it with humor, sad you have trouble seeing that.
Top


And besides, the normal way of dealing with that in an RTS engine is to have Level of Detail ('LoD') scaling, I'm amazed if AoA's engine overlooked that.

It's the same engine as wargame. Iriszoom was MADE for these kinds of zoom levels.

This was what I was thinking, too!

Arky01 wrote:Dude, it was clearly meant with a hint of sarcasm and simply done to inform the person that it's not a bug... And he tried to do it with humor, sad you have trouble seeing that.

This is what he wrote:

[EUG]MadMat wrote:If you keep calling it a "fix", for something which is not a bug, it will lesser its chance to ever happen ...

Now please tell me how someone who doesn't now MadMat in person can be sure that it was a sarcastic post where he tried to be funny?

If he would perhaps have used the

smilie instead it would, to me, appear more clearly that he was sarcastic. But his post consists of a clear statement with no obvious sign of humour or sarcasm. Though as you said I can be wrong (which I mentioned in my original post) and I hope I'm wrong. But then please tell me where you got this information that he clearly did it with sarcasm and tried to do it with humour. It could be that way, yes. But everyone will not interpret it like that and therefore I find it justifiable to react on his post.

And it seems like I wasn't the only one who didn't think he was just trying to be funny. Perhaps it's better to be very clear when you're part of Eugen and supposed to give the community and players information about the game? I know you probably don't agree with me, but that's my opinion.

Feedback on the camera

Have to say, that at first I fought that the camera, like it is implemented now is fine, but now that I played some more battles, that is what I have to say.

I liked the idea but practically, who uses the satellite camera has a big, big advantage even against EI. You can produce units and manage them on the battlefield 180% quicker and better than without it, why ? because you can se more, so you can manage more in the same time. Even when we forget what even for me now became game breaking problems, do you expect us to manage the battlefield and at the same time trying to produce units or research upgrades. Do you know how much time and confusion it takes to find the right building in heat of battle. I would compare the satellite camera to Total War Rome 2, just that in this game you are in a bigger tunnel vision. How many people use the strategy map in Rome 2, in all my hours I opened it 3-4 times.

I am 100% sure that at some point you the developers will be forced to change this, when not before the release, you will have to do it after. I just can't see why this should be good anymore, but I think it shouldn't be removed because it gives you good battle awareness. How eaver it should be put as a overlay after you fully zoom out, when you zoom even further you can use the satellite camera.

This pictures outlines why I multiple times left the game, ok I wasn't so pised but still ! last few days, been going back and forth between this and RD... and yes i know its not Wargame, but they got the zoom functionality so right, wish they will find some LoD solution for AOA so that we can pull camera back another 15-20%. it almost gives me a headache (not trolling for once) playing this game out of satellite mode because of how limited your information and management flow is at current level.
Top

I am certain that everybody knows that AoA is not Wargame, neither RUSE. But with some decisions it is at least a step back from what made these games great and special. AoA wants to be a classic RTS? Ok, but please don't take to much features from Dune 2.

But wait! In Dune 2 you could see most of your base without scrolling.

(Being sarcastic. Just for the record)
Top

Eugen is afraid to lose buyers with slow computers, this is entirly dumb since people with slower PCs are able to switch graphic options to LOW graphics (I'm sure guys with slower pcs dont give much of a damn about the way the game looks, but how fun it is).
All in all, Eugen is losing a lot more players from the ZOOM reason only, I'm afraid that they're just lazy working on the engine to make it more friendly for the PC and instead force everyone to play on a 8 bit shittylite view.