“Ace of Spades”, the sixth free update for Steel Division: Normandy 44, is now available! It features brand new Attack/Defense scenarios alongside with two new cosmetic Aces, a couple of upgrades, and the traditional fixes. 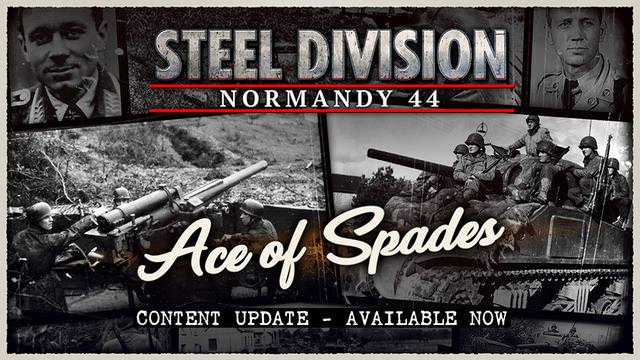 With no further suspense, here is the patchlog:

As announced in our content roadmap, we’ll update Steel Division: Normandy 44. Unit pack and Coop mission pack are coming soon for free, and more to be announced!
Have fun!

Note for modders: You will need to generate and upload your updated mod to make it compatible with this new version.

Re: 'Ace of Spades' update, featuring Attack/Defense and new Aces, is LIVE

No balancing at all...

Re: 'Ace of Spades' update, featuring Attack/Defense and new Aces, is LIVE

Enjoying the game very much so far. As always thank you for the added content.
Top
Post Reply
3 posts • Page 1 of 1