Mike wrote:Well the entire premise of the Wargame series was meeting engagements.

Maybe players want a engage with defense in-depth or use other tactics.

Remember guys, the game needs PLAYER RETENTION and a lot of players like defensive stuff. Im not asking for turtle tactics, Im asking for a more diverse gameplay options. Defensive tools is a good option for SD2.

That's not how meeting engagements work.

I’d love to see engineers being able to build things very very slowly. Like destructible bridges. I know that it is unlikely they would finish them before the game ends but it would be nice to be able to try.

Also love to see a reason to implement funnies like the mine clearance tanks and for the brim at and such to have something to fire at in trench work and such.

Meeting engagements were not the majority of ww2 engagements. I’d love to see at least some form of foxhole or trench and barb wire sort of thing. I want them so that assisting trenches with infantry is a thing. As it would have been

Also maybe like to see tank recovery. We kind of already have that in Sd44 but to see semi trailer tank transporters would be nice or bergtigers.

Like to see fuel come back as a consumable. On the bigger maps that are sure to be on the Russian front it may become a thing we need in game.

Destraex wrote:Meeting engagements were not the majority of ww2 engagements.


Another example for defensive stuff: 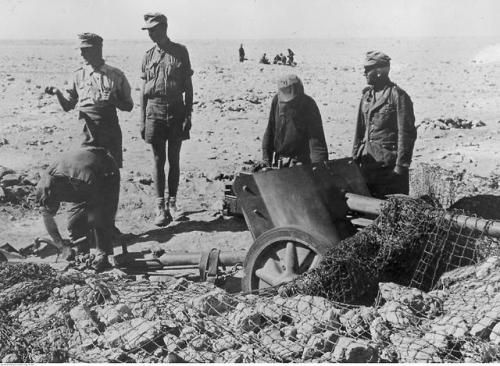 Sandbags and other light quick build fortifications are already simulated in the game, if you leave infantry standing still in the middle of a field, they gain a small cover bonus. I don't remember the specifics about how long it takes or how much the bonus does. As for other fortifications, Bunkers are right out, trenches could be a maybe along with tank traps. The ability to create makeshift roadblocks would be a pretty good addition to the game, but probably not really in the scale SD is set in.
Top

Do we need more defensive buffs in SD:2?

Attacking is hard enough in both the SD and WG series as it is.

There is a significant difference SD44 has in terms of defensive options which WG largely did not have to deal with and it's stationary AT-guns. To summarize, AT guns feel like a separate tower defense mini-game in a game mode where fast combat and zerg-micro abruptly meet leading to friction. If you manage to deploy a number of AT guns you either achieve herculean feats to stymie a platoon of vehicles or have stuff on the field that is easily countered by air strikes or indirect fire that result in negative returns and a futile exercise in throwing away good points after bad. Which ever way you look at it, AT-guns don't naturally flow with a meeting engagement core game mode and feel lopsided leading to some player frustration.

I think the Phase concept was a good idea *if* we wanted players to establish a front-line where it would make sense to set-up strong points with AT-guns while trying to probe the enemy for weak spots. Then, Phases B and C would then turn to a game of assaults mimicking some elements of real life while maintaining the semblance of a fun and fair game between players with the pace being throttled up. In order for something like that to be functional a lot of typically Phase B units would not have been available in A and thus lose some coolness factor. However, to do so with a meeting engagement scenario feels like the game is forcing players to play a certain way rather than let the options provided by the player organically develop to make logical decisions. There was the coop mode which adequately did the front-line mechanic but this didn't solve the issue of why "defense" felt different in SD44 than compared to WG.

Also, most Anti-Armor options available are filled with expensive and vulnerable AT-guns. There is a real struggle with AT Guns as they do emulate the correct historical drawbacks which significantly impacts AT gun usefulness when we get to actual combat which is quite fast and feel lopsided in either direction. This wasn't so much of a problem in the WarGame series as most Anti-Armor options you had were very mobile light units (armored/unarmored vehicles or helos) or infantry with long range ATGMs which benefited by being entrenched in buildings like other infantry. Being historically accurate, AT-guns generally are not a good stand-in for the mobile type of combat SD44 came from with a WG game mode.

That being said, I'm not sure what improvements the devs have in mind for SD:2 to make things different and less complicated for new players. I can see why the OP would make a suggestion to have bunkers though I don't think that would work with a meeting engagement scenario. If the goal is for players to set up a frontline or initial defense backed up by stationary strong points then that best should be served with a better designed game mode. There is less of a struggle with WG series and to me one of the obvious things is that mechanically AT-guns do not really flow as well as it should with the core game mode like it did with ATGMs.
Top

Maybe the new game will introduce a new offence and defence game mode. Where a weaker force with more defensive works defends against a more superior attacking force. One where winning is just holding more ground than you lose. Who knows.