Spezialaufklärer are not available in armoured.

Barak II is too cheap and should come at 2 on hardened, not 2 on veteran:
Spoiler : : 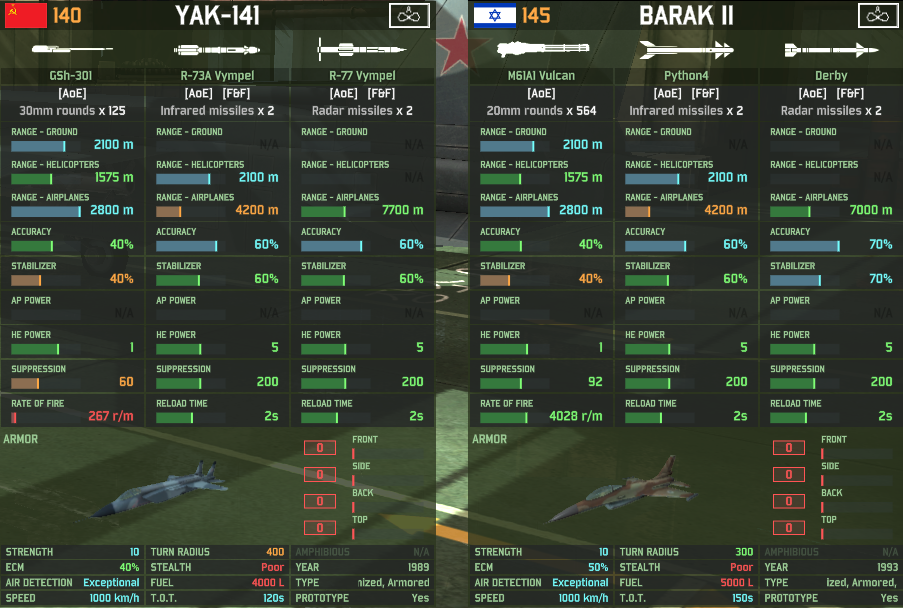 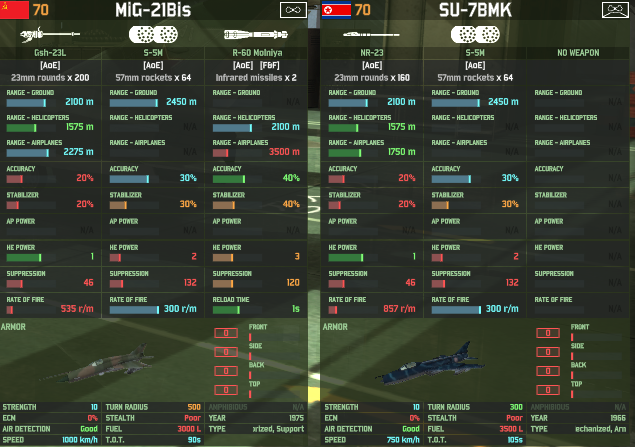 The avaliablity of infantry in the CH-46 is reduced compared the UH-1N Twin Huey and CH-47 Chinook.

The M60A2E1 and E2 has the MGM-51 when they should have the MGM-51C aka Shillelagh-C. It was in service before their introduction dates.

Dutch KBA 25 (autocannon) has less accuracy than the Japanese and Canadian versions:
Spoiler : : East German MiG-21ML comes only at 2 on veteran:
Spoiler : : 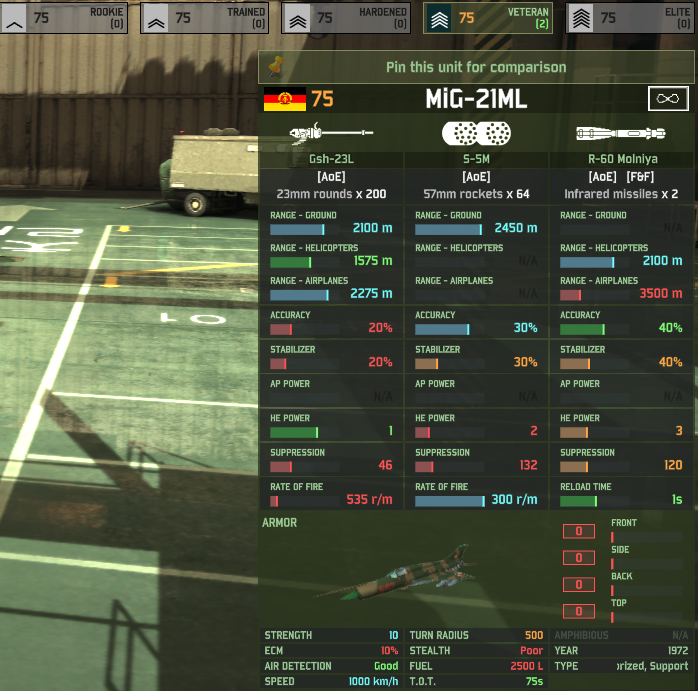 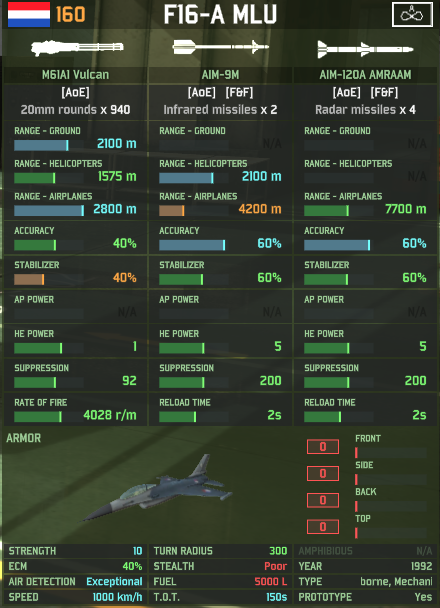 Tornado F3 (2 at hardened) has inferior max veterancy option to Polish Mig29.13S (2 at veteran) despite costing the same ($135) and having inferior missiles.
Spoiler : : 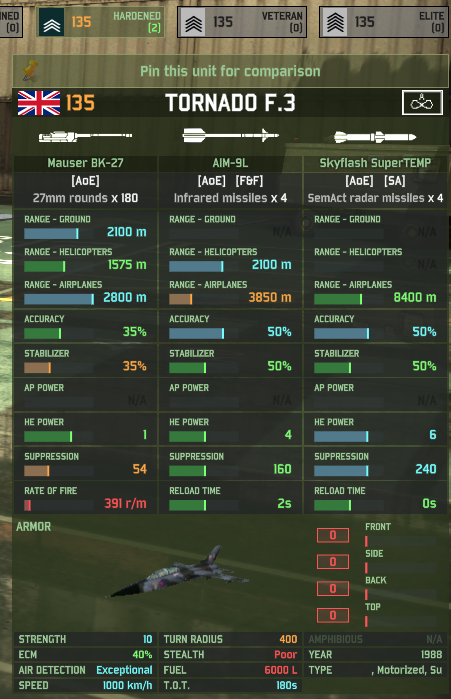 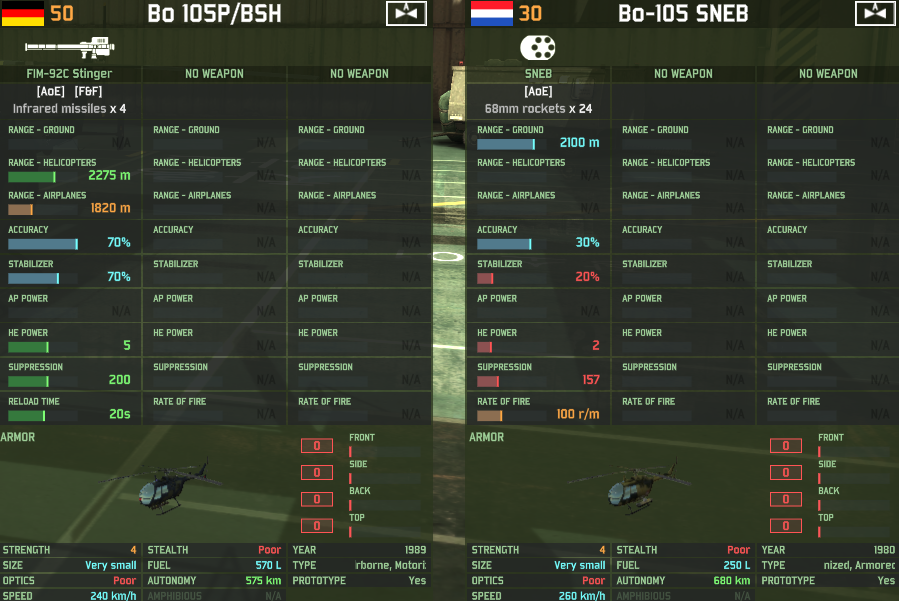 NK MiG-21s still get only 2 per cared whereas the MiG-27 (and a few others) which are clearly better get 3 per card:
Spoiler : : 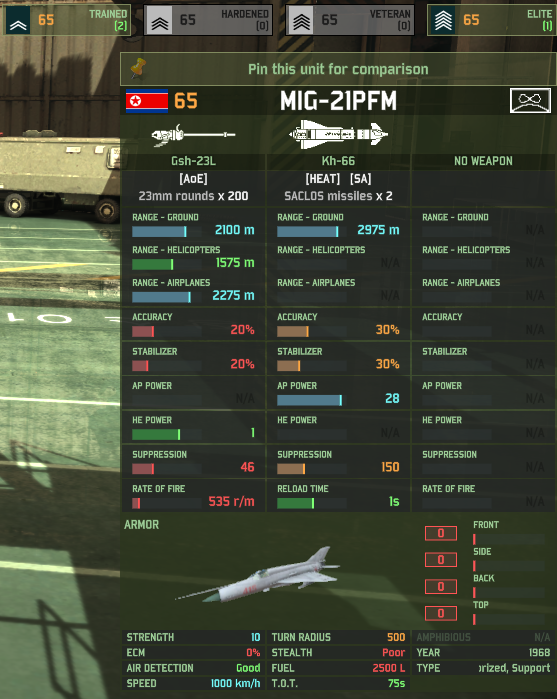 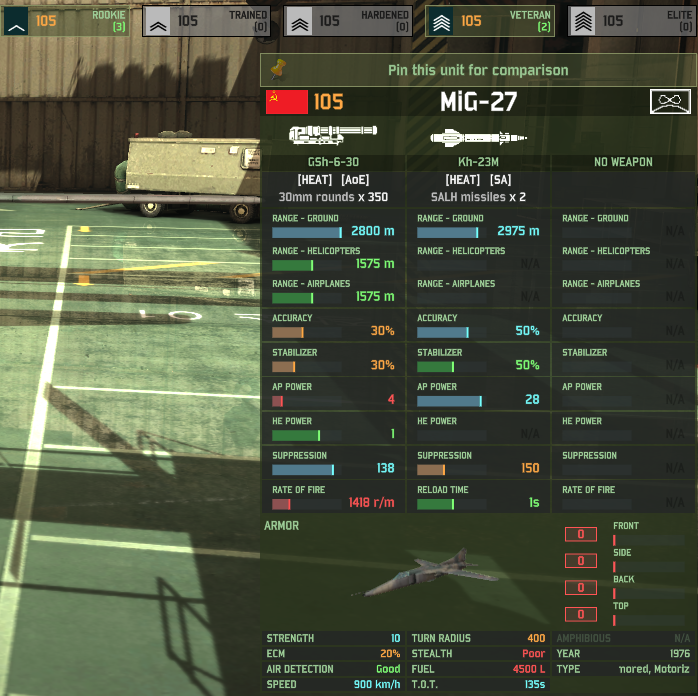 Leichte Schützen should be 30 km/h like other shock light infantry:
Spoiler : : 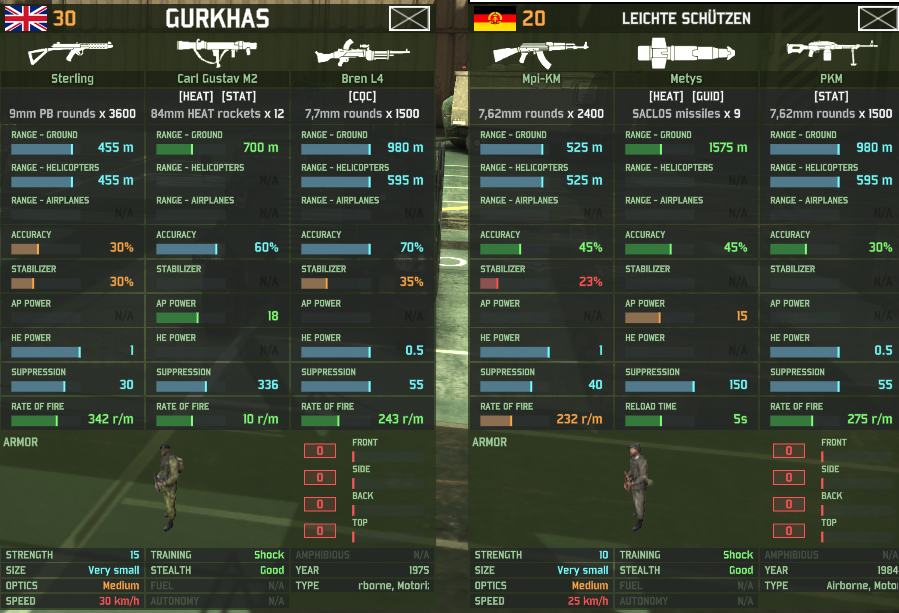 F-7B has worse availability than the J-7IIM despite being the worse plane:
Spoiler : : 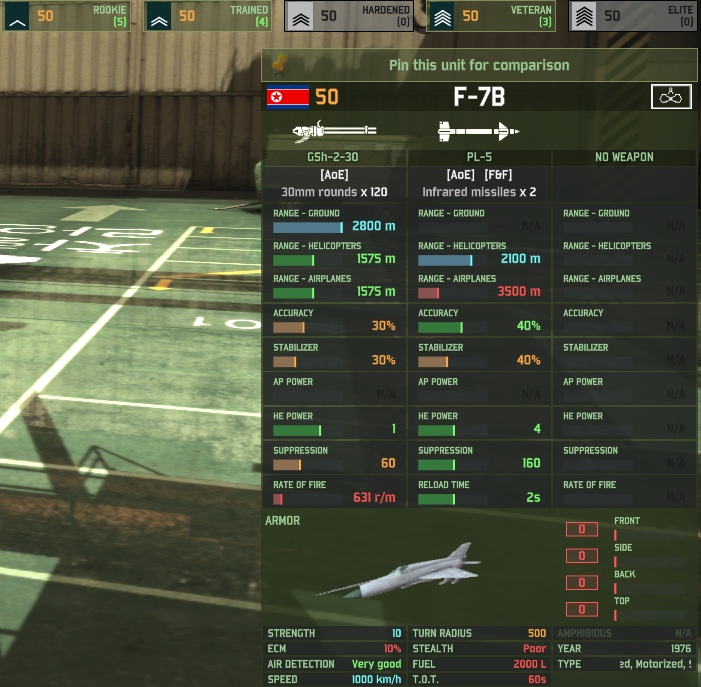 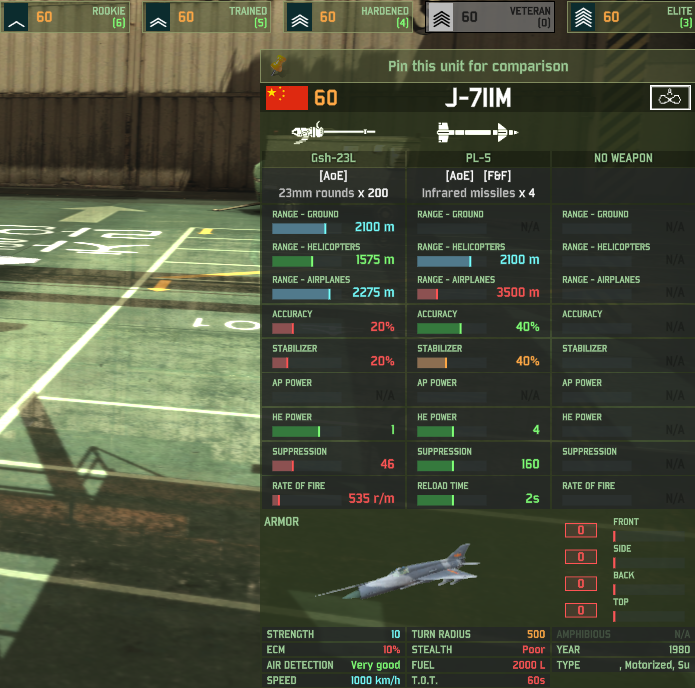 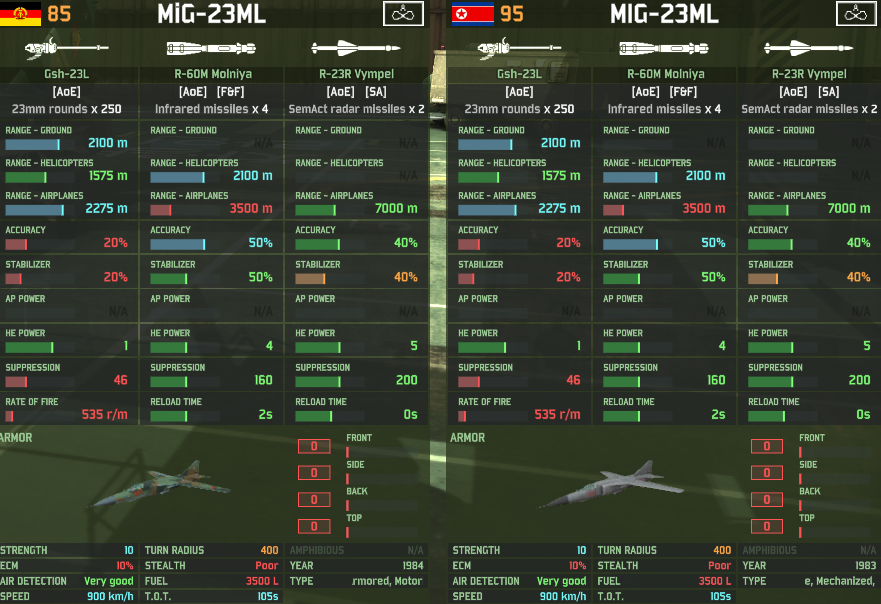 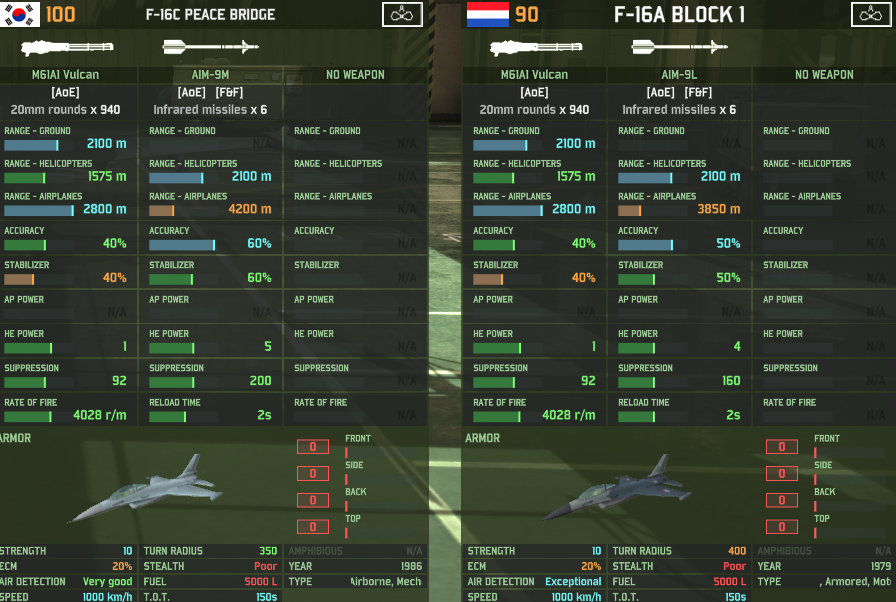 Tank availability is all over the place (copied from Urogards thread: viewtopic.php?f=155&t=57789)

The NK recon type 63 has inverted autonomy and fuel values. It should have 545L for 370km range. Fixed!

PTZ-59 has lower accuracy compared to the ZTZ-59-II which it is modified from Fixed!
Spoiler : : 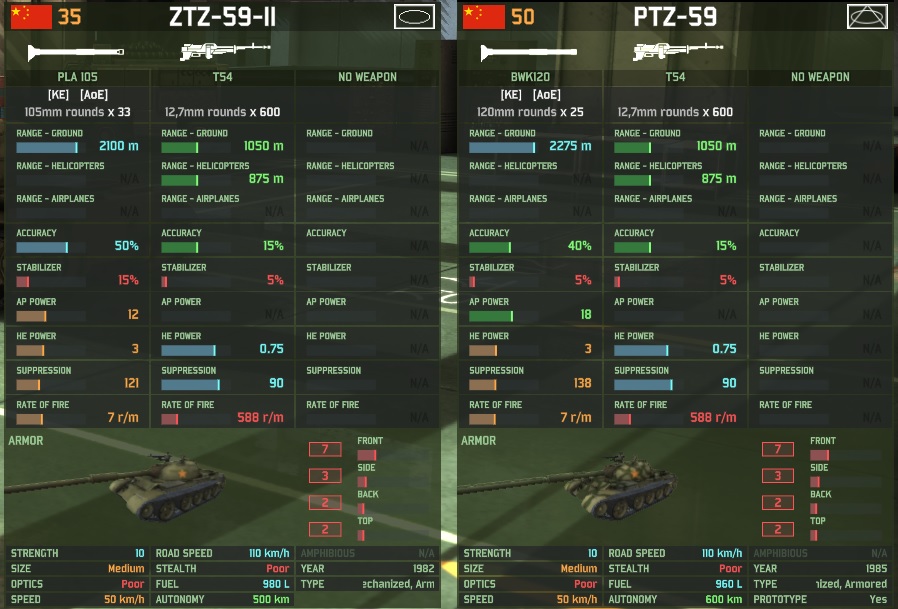 PTZ-59 has lower accuracy compared to the ZTZ-59-II which it is modified from Fixed!
Spoiler : :

PGZ-95 has very slow rate of fire for its QW-2 manpad (6 seconds between shot), unlike every other gun/manpad combo Fixed! 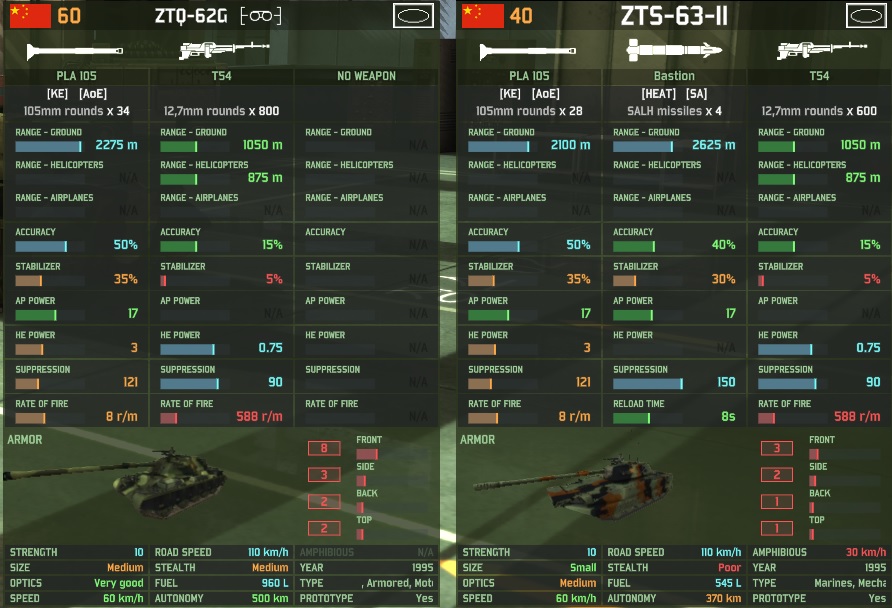 Japanese line infantry gets an availability when used in the HMV: Fixed!
Spoiler : :

The introduction date for the Sheridan in the tank tab should be pushed back to 1968 to fit with the MGM-51C that it is armed with. Fixed!

The BRDM-2 CV has Poor Optics whereas other Command Units have Medium. Fixed!

Puma command helicopter is not available in motorised whereas the other helicopters are. Fixed! You get 2 cards of the Dutch 5point truck (al other nations only get one): Fixed!
Spoiler : :

The ZGD-86 should get the same amount of ammunition for the Grom as the other BMP-1s: Fixed!
Spoiler : : ZTQ-62 recon gun rpm is much lower compared to type 63 despite have the same gun and vehicle dimension. Also the ZTQ-62-I should have the same AP power like type-63/ZTS-63-I due to the ammunition of the same time periode. Possibly also an increase of range because of the laser rangefinder (ZTS-63-I doesn't have one ingame due to wrong model): Fixed!
Spoiler : : 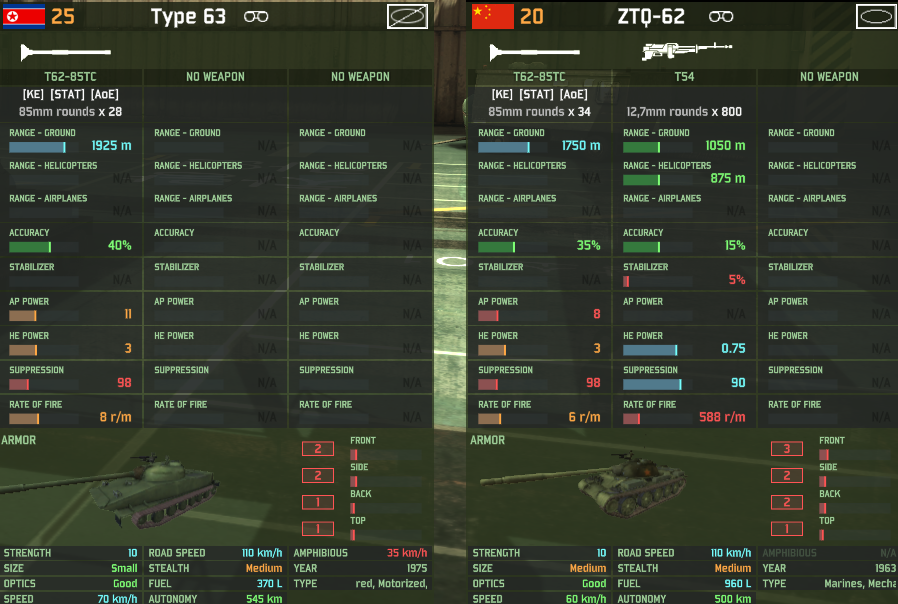 The Canadian Cougar Recon has lower availability (8 Trained/6 Hardened) than other Good Optics Vehicles and is cheaper than the non recon version: Fixed!
Spoiler : : Take a look at the VAB T20/13 availability. Reduces it by a lot whereas other transports do not. Fixed!

I assumed the reasoning behind the C eagle vet was that it wasn't prototyped. Also the TOT of the danish mlu vs dutch one even more reason for change like you say
Top

There is a lot of other stuff.

Su-24MP has only 1 of avail and elite too. E Typhoon has 2 cards with 2 planes each (4 in total). The most of bluefor planes have 195 seconds of autonomy

a few tanks had change in availability i've noticed too. like t72 and t72a for ussr
Top

a few tanks had change in availability i've noticed too. like t72 and t72a for ussr

Look in the log, it is stated that MBTs availabilities were modified to match the new prices. Without going into the details.

Side note: Leichte Schützen vet and MG are still wrong. They should have their 5 percent stabs and up in 1 lvl of vet.
Last edited by kvasius on Thu 19 May 2016 22:44, edited 1 time in total.

Why is Tomcat veterancy so low? Mig-31 is 2x Hardened and Mig-31M is 1x veteran. 1x+1x trained is too low, should increase to 1x+1x at hardened or veteran.
Top
Post Reply
523 posts

Users browsing this forum: No registered users and 15 guests