Type 96 from what I read, was put in production in 1996(hence the designation) but only put in service in 1997

That would make the non-Prototype Type 96 acceptable in Wargame? given that the somewhat Prototype was Type 85-III.

Taken from http://tanknutdave.com/the-type-96-main-battle-tank/
Spoiler : :
The 96 was the PLA’s first Main Battle Tank, entering production in 1996 and replacing production of the Type 88 which had ended in 1995, which is also a 2nd generation tank. With the introduction of the Type 96, older Type 59’s and Type 69’s started to be withdrawn from service and the 96 started to be equipped amongst the more elite PLA tank regiments.

It was the first MBT to be equipped with a large 125mm bore cannon (48cal Length) and is equipped with a thermal sleeve. It was also the first to use frontal modular armour which was installed with an unknown ceramic tile mix. Like all Chinese tanks, the sides and back of the turret are fitted with storage racks, which double up as a form of spaced armour, AKA bar armour.

The engine is the same 1000hp diesel of the Type 85-III, giving the vehicle a top road speed of 65km/h and power-to-weight ratio of 24.1hp/t. It also uses torsion bar suspension. It has an operational range of 400km, which is increased to 600km with external fuel tanks.

The autoloader as fitted on the Type 85-IIA still keeps the crew reduced to the three. The driver sits on the left at the front of the hull (the engine is still at the rear of the vehicle) gunner is on the left of the turret and the commander on the right. He is responsible for operating the 50. Cal MG which is used in the AA role. The vehicle has a coaxial 7.62mm MG and there are six Type 84 smoke grenade launchers mounted either side of the turret. The vehicle stores 42 rounds of 125mm, 500 rounds of .50 and 2250 rounds of 7.62mm.

The FCS is the ISFCS-212 image-stabilised fire-control system as fitted on the Type 85-IIM up-grade, giving an effective rate of fire of 6 to 8 rounds per minute.

Since Type 85-III's armor is mostly steal/composite with lots of ERA slapped on it, and as mentioned there Type 96 used Ceramic Tile, I think they would really be 2 separate tanks? though idk about what the protection of the ceramic armor in RHA mm, it most likely is higher than Type 85-III.

If that were the case, maybe ZTZ-96 as top tank, we can likely have. . .
main gun:
23AP
65~70% acc(70% was in account to the above mentioned new FCS)
55~60% acc(also accounting into the above mentioned new FCS
8r/m (which all 125mm ZTZs should get. . .)
37 ammo(cited 41 ammo capacity but we'll leave 4 for the Refleks)
2nd armament: Refleks
3rd armament: coaxial mg
Armor:
21~22FAV, not sure how to rate the rest given info says unknown ceramic tile
sides maybe 8 with 4 rear? added space armor from Storage? but can just have same sides and back of the ZTZ-85-III

Comparison to the T-72BU, it would have same or better accuracy and stabilizers, better ATGM, same armor, worse rate of fire, SAV and only 3 top armor instead of 4

those stats would easily make it a super heavy in game, it matches against the T-72BU well? o3o' dunno what you guys think

On another note, maybe Red Dragon's flavour on tank was supposed to be cheap tanks spam? China and North Korea almost had it with the PL105 armed tanks and the Chonmaho. Had the PL105 armed tanks had 2275m range and Chonmaho IV got 7r/m, spamming them all over doesn't sound so implausible even if the enemy had a good number of heavy tanks? (though prolly still kinda bad in terms of head on engagement as while your cheap tanks are scratching the paint off those heavy tanks, those heavies are 1~3 shotting all those cheap tanks)

Bougnas wrote:Keldon: do you have reliable information about the HJ-8 and 9 versions we have ingame? For the ATGM sourcehunt.

reliable is kinda hard to say, but the best i can found i posted in the source thread.

codextero wrote:looks all good, except for 24 AP. There's very little public information about Chinese sabots. What is known is that they worked with Israel on their new rounds, and since the ITF Israeli top tier APFSDS is equal to the DM-53, it's plausible to make the Chinese round the same.

The round is "特种合金穿甲弹", this is the name PLA uses for DU penetrators.

Killertomato wrote:If Type 99's autoloader is based on T-72's like the English internet says it is, it is extremely unlikely that 1998 Chinese sabots are equal to M829A2 for the simple reason that the penetrator cannot be as long as M829A2's.

I'm pretty sure the autoloader needs to be remade for those later tanks, since the ammo has a much longer penetrator. The Pakistanis got some of these ammos in 90s and doesn't fit in their T-80 auto loader. The usual procedure done by PLA when dealing with something they didn't have previous experience with is: copy, assimilate, adapt and improve. Also, please don't believe everything the english internet says.

I did this possible lineup list with some pre condition tied to it, which is: removal of ZTS-63A, ZTQ-62G (both are post 2000) and the T-90 (give it to Honecker, he needs it). China in this case would bring the high-end stuff and NK hopfully would bring a more medium centered tank force with newer Chonma.

As to the concern about OOTF units itself, i think you are certainly aware there are units ingame which are way out of the picture but is in there for gameplay reasons. The thing about ZTZ-99 or WZ123 is, it started in 1994 and there are various protostages which can satisfy eugens preference for flavor (one Proto is armed with manpad, and in general all protos are equipped with a big disco ball), i picked the final stage in 1998 because in my head the T-90 is gone.

Also, it is true that the ZTZ-96 is basically ingame, since the 85III has pretty much the same stats right now, thats also the reason why i jumped from 85IIAP to 96.

I really don't think it can be qualified as super-heavy. The current stats of 85III are a pretty good representation of the 96. The 96 is intended from the beginning as the replacement for the cheap ZTZ-59 and is lacking all the nice toys the ZTZ-99 has. I personally think RD tank tab should be like kinda like eastern block with Moderna + Twardy. But that T-90 is kinda sticking out.

Also, like i said i can make the list more in-depth and more coherent, i generally can tell the PLA tanks apart and provide the correct reference pictures also point out the characteristics. But the ship for this sailed 2 years ago and my primary concern is about salvage the situation and thus the first post in this thread.

it is possible, china did place a 125mm gun and autoloader on a ztz59 for testing 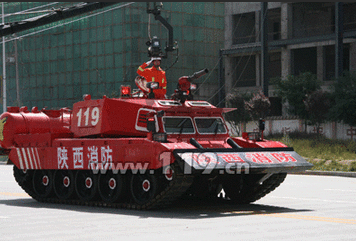 Mike wrote:I don't want the M1A2 SEP nor F-22 because the game is set in the early 90s and not Operation Iraqi Freedom. And as per balance, you pretty much have the ZTZ-96 (needs 8 RPM) as the ZTZ-85-III of I remember Keldon correctly, and China doesn't need the ZTZ-99 when there is already the ZTZ-96 present.

Perhaps you are right. However, I just want to compare RD faction with Eurocorps. I didn't say we must add ZTZ-99 to the game, but since Eurocorps has L2A5 and Leclerc, we can give RD a tank sort of like Leclerc, instead of adding ZTZ-59D or something like that (because I feel ZTZ-88 and ZTZ-85II are already good for such role in game, ZTZ-59D would be no more than T-55AMV which almost no one uses). Of course, another way is to be like Commonwealth that having 3 Chally 2. I am totally OK with 3 T-90S for RD faction and 4 for NK faction(like British), and make ZTZ-85-III as an equivalentce like Challenger 1 Mk3.

The current PTZ-59 has a introdate of 1985 and proto, which is apparantly simulating the testplatform of possible upgrades for ZTZ-59. I don't think this early version has an autoloader. The upgradekits for 125mm ZTZ-59 is a pretty new thing, most of them are severly OOTF.

But something different now, since i was checking for that HJ-8B on choppers.

It can only carry 4xHJ-8, because how the carrier is constructed.

The missile need to be adjusted, since they were actually damaging the chopper when firing, thus it delayed till 1995 for the new missiles to be availble (Which is i believe the HJ-8E) and a new carrier arm as seen ingame.

See those 8 ATGM, and i believe those 90mm rocket pods can possibly be an armament for some Chinese choppers pretty early on.

btw. What is required for a chopper to be a recon? Since at least the Z-9WA is specifically called a recon.

I believe good/very good optics helicopters just have to be in the recon role. What the difference between "good" and "very good" is, I don't know. To have exceptional optics the helicopters need special surveillance equipment, radar or be operated by special forces. I suspect China didn't get a recon Z-9 because Eugen assumed all Z-9s were prototypes, and didn't want to add that many.

I think it is possible to be a semi automatic loader like the ptz89, but there isn't much info on it

80pts is unacceptable.
The USA is #1 exporter of freedom!
All other countries have inferior freedom!
Top

keldon wrote:The current PTZ-59 has a introdate of 1985 and proto, which is apparantly simulating the testplatform of possible upgrades for ZTZ-59. I don't think this early version has an autoloader. The upgradekits for 125mm ZTZ-59 is a pretty new thing, most of them are severly OOTF.

But something different now, since i was checking for that HJ-8B on choppers.

It can only carry 4xHJ-8, because how the carrier is constructed.

The missile need to be adjusted, since they were actually damaging the chopper when firing, thus it delayed till 1995 for the new missiles to be availble (Which is i believe the HJ-8E) and a new carrier arm as seen ingame.

See those 8 ATGM, and i believe those 90mm rocket pods can possibly be an armament for some Chinese choppers pretty early on.

btw. What is required for a chopper to be a recon? Since at least the Z-9WA is specifically called a recon.

So the Z-9A wasn't proto according to an earlier post. Is the Z-9W from 1988 a prototype? Are there more ITF weapon options and variants for the Z-9 (protos and non-protos?).