Hi, we played "Stemming the Tide" and "Desperate Measures" without issue vs the 'Easy AI'.

However, in playing 'Last Hope' as both Soviet (2019/07/25) and Axis (2019/07/27), both times we found the game desync'ed with some of the other player's units static/unresponsive - resulting in questions such as "why haven't you unloaded those units", "move those units up for support", "move your infantry through the town and clear out the AT infantry", etc.

I'm guessing that our infantry are being killed in their transports by mortar or artillery fire and that the owning player sees the infantry and transport killed, whilst the co-op player sees them as unloaded but inactive.

I'm not sure if a similar issue effects tanks (I haven't see the replay from the other player's perspective) but ... I was being asked to move up tanks - that had been wiped out previously ?

Is this a known issue, what can I do to help (i.e. saving the replays locally and uploading a link) ?
Top

Seeing the same desync issues in some of the other "Historic Scenarios" but it's not all of them - some scenarios/maps are good with the end of battle report matching (or very close) for both players (same kills/losses tally) but for others we've seen upto +1000 points difference when comparing results.

• "Terminus Krupki (2vs1) = the replay "result column" says "Victory" but IIRC there was a small point difference (can't be 100% sure on that).
• "Cavalry Action (2vs2)" = was good - no desyncs / after battle point differences
• "Autobähn zur Hölle (3vs3)" = bad desync / point difference (one co-op match ended with one Soviet player winning (getting the Steam achievement) and the other loosing to the Germans). 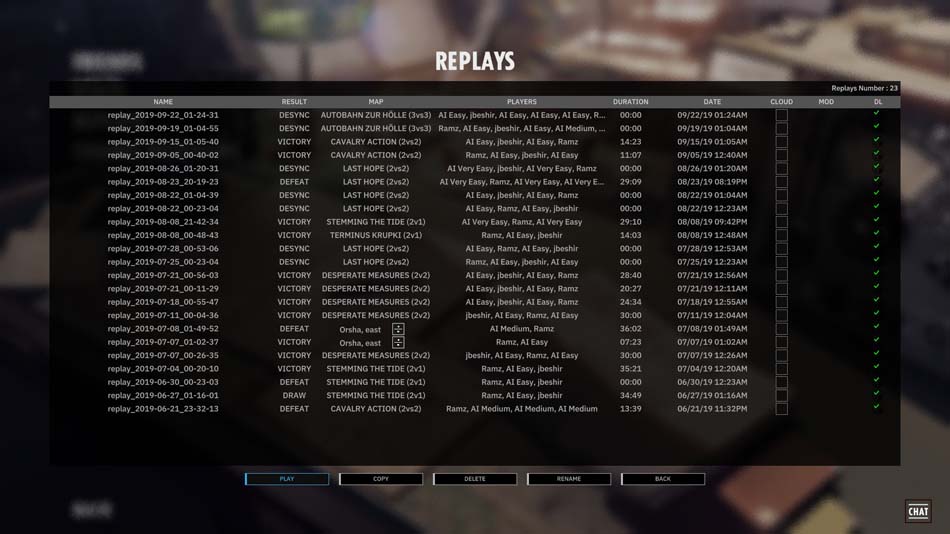 Have to admit to being a little disappointed there's been no feedback on this and am regretting pre-ordering the "History Pass", as co-op vs AI reliability looks uncertain.
Top

We continue to have desyncs in coop, this time in 2 vs 2 skirmish vs the easy AI.

So will roll back to SD:Normandy 44, as we know that works.
Top

I recently reinstalled SD2 to see if anything had changed with the numerous patches and updates released over the last 9 months.

As i noticed I could once again create a private server, I retested the problem missions/maps and the desyncs between coop players seem to have gone.

I don't know if the fix is due to something on Eugen's part or on my side - I've switched to fibre(faster/less lag), a new PC (solid 60 fps), it's a clean reinstall and I've upgraded History Pass --> Commander Deluxe Pack.

As my other games Overwatch, SD44, etc. continued to be playable (no desyncs), I suspect the problem was specific to SD2 or it's configuration.
Top
Post Reply
4 posts • Page 1 of 1